ICYMI: Superstore’s Finale Was an Epic Takedown of Big-Box Retailers 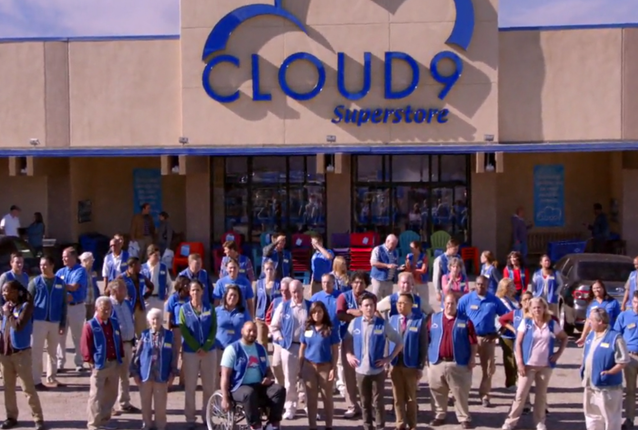 Court rooms. Emergency rooms. Classrooms. Chances are you could name a dozen television series that center around these workplaces. And with 13 million people working in retail around the country, you’d think we’d see lots of depictions of the women and men who stock store shelves, help us find our perfect size, and yes, respond to “clean up on aisle nine” on the small screen. But unless you count commercials, expect to be disappointed.

That’s why NBC’s comedy series Superstore is such a revelation. The show, which premiered last November, explores what it’s like to work in a big-box store called Cloud 9. While most of the day-to-day drama is played for laughs, this season’s finale, “Labor,” got very, very real about what isn’t working for the people who work in retail. We invited a number of experts to watch the season finale and share their perspectives. Keep reading to learn everything the show got right and why we consider Superstore must-see TV. Warning – spoilers abound. If you’d rather watch the show first, check it out here.

Family-Friendly Workplaces Are a Farce on Superstore

The episode kicks off when the extremely pregnant character Cheyenne refuses to go home after she almost goes into labor in the Cloud 9 store where the show takes place. Why won’t Cheyenne listen to her co-workers who implore her to stop working? She argues she needs the hours to support her soon-to-be-born child.

“Delivering a baby at work, viewed by shoppers on multiple large-screen TVs, may be the stuff of sitcoms, but the reality of lousy pay and no leave is quite real. Nearly one in four pregnant women who are employed return to work within two weeks of giving birth, mostly because they can’t afford to be off without pay. That’s as far from Cloud 9 as you can get.”

When Cheyenne’s co-worker Jonah grows concerned about her well-being, he points out that every other industrialized country has a paid leave policy (TRUE!). He opines that since Cloud 9 made over a billion dollars in last year, the least they could do is give her some paid parental leave.

Indeed, we all experience the need to take time off from work when we get sick or care for an ill family member or newborn. Yet only 13 percent of working people in the United States have access to paid family leave through their employer, and the figures are even worse for those who work in retail.

Lydia Flores knows this all too well. A mom of three, she’s worked as a cashier at an El Super grocery store in Arleta, California, for 12 years. She explained that maternity leave is available to employees, but it’s unpaid, and “you have to go on disability” to be eligible. However, together with her union, UFCW Local 770, she finally earned three days of paid leave a year by pressuring the state to enact the “Healthy Workplaces, Healthy Families Act” in California. Flores continues to advocate for more family friendly policies and more paid sick days in ongoing negotiations with her company so she can take care of her son who is often hospitalized with seizures.

As someone who is striving to get a fair return for her work in retail, Flores found the episode “realistic.” Just like Cloud 9, El Super won’t grant her full-time hours and assigns her shifts that vary from week to week. When Flores and her co-workers push for more hours, she says company management “messes up everyone’s schedule” to discourage anyone asking for more. Instead of providing stable hours and sustainable jobs, many retail companies like El Super assign part-time hours and erratic shifts to employees, making it difficult for individuals to budget monthly expenses, manage child care and make ends meet.

“I do my best to survive, but it’s not easy living paycheck to paycheck. I’m getting tired of apologizing to my kids for the water getting cut off. You’d think because I have a job I should be able to pay for that,” said Flores.

Did Somebody Say Union?

In the finale, Jonah just isn’t able to drop the idea of helping his co-worker and he implores the assistant manager Amy to ask corporate to change the store’s paid leave. On the phone, a Cloud 9 corporate representative bluntly responds “That’s just not something we offer.” Jonah asks them to reconsider, as other stores do offer paid family leave policies, though typically they have unions.

Suddenly there are multiple people from Cloud 9 management on the line, sounding panicked. Why the alarm? Jonah said the u-word. His mere mention of a union causes corporate to dispatch a “labor relations manager” to their store to tamp down the union talk. The next day the manager proceeds to lecture the staff on how much Cloud 9 cares about the health and welfare of its associates and explain how they have an open-door policy for feedback while simultaneously cutting off each employee who tries to explain how the stores policies are impacting them.

The company’s response in the episode “wasn’t atypical,” said Wilma Liebman, former chair of the National Labor Relations Board (NLRB). “It can really just take a whiff of something” for companies to act in swiftly to prevent employees from joining together. She continued, “which isn’t to say it happens at all companies, but it’s particularly common for a company of a larger size, like retail.”

“The company’s reaction was very heavy handed.” Reacting to the scene when the corporate representative explained to the Cloud 9 employees that they have a right to join a union, but that they didn’t need one, Liebman explained further: “These things are pretty carefully scripted.” Big companies have lawyers and experts to ensure their conversations, however intimidating and pressuring, don’t cross the line into violating labor law.

As someone who has been forced to sit through meetings with the president of her company to persuade folks to not support her union, Flores can relate. She chuckled recalling this scene, offering that “Corporate was giving them the runaround, but they heard the word union loud and clear.”

After the meeting, Jonah begins to realize that his big box store management doesn’t care about their health and welfare at all. “We’re the people who make this company run. They need to start treating us better,” he exclaims.

The staff who have been working at Cloud 9 for a while are jaded, but Jonah reminds them they all have faced real challenges working at the company. Someone then volunteers that she hasn’t “had a raise in six years.” Another associate complains that the company keeps them from getting 40 hours a week, just to prevent them from qualifying for health benefits.

Jonah suggests that they should be speaking up about this and form a union. His co-workers aren’t sold and respond with cynicism, disbelief and fear. But Jonah doesn’t relent, arguing to his teammates that “nothing is going to change around here, unless we help change it.”

Soon enough, the labor pains are felt by everyone at Cloud 9.

Cheyenne finally gives birth in the store. Glenn, the store manager, decides to ‘penalize’ her for going into labor at work and suspends her with pay for six weeks. The corporate manager gets wind of Glenn’s act of compassion and fires him. The assistant manager Amy is encouraged to take over. A longtime and rule-abiding employee, Amy is incredulous over the news that corporate fired her manager when he has devoted his life to the company. So instead of taking the promotion she reaches out to each of her co-workers and encourages them to join her in protest. One by one, each associate learns about what happened to their teammate, and they all decide to join the walkout.

The show concludes with a big cliffhanger – as the associates who walked off the job are all summarily fired.

Viewers are left to speculate what will happen to the Cloud 9 associates. But, first things first, is it even legal for them to be fired for their walk out?

According to Liebman, “It is not uncommon for employees to be fired or retaliated” against but “employees have a legal right to walk off the job to protest something about their working conditions.” And while a spontaneous walkout would be allowed even when men and women aren’t officially in a union, Liebman notes that this walkout was unique. “Since the employees are walking out over a discharge over a manager, the law’s a little uncertain here.” In real life, the Cloud 9 associates would need to make the case that their walkout was meant to impact their workplace conditions.

Why Superstore Is Must-See TV

Superstore breaks ground by mining for both the humanity and the hilarity of working in retail. Just like the most recent season of the excellent Orange Is the New Black, the series offers viewers an entertaining look at the highs and lows people experience when they come together to create better workplaces. You don’t have to work in retail to empathize and root for the Cloud 9 employees as they strive to earn a fair return on their work. As more and more people – whether fast-food clerks, adjunct professors or care providers– join in union for a better life, we can hope the trend continues to play out on the small screen as well.