How to Fix Housing Crunch in SF? Make Tech Pay Their Fair Share 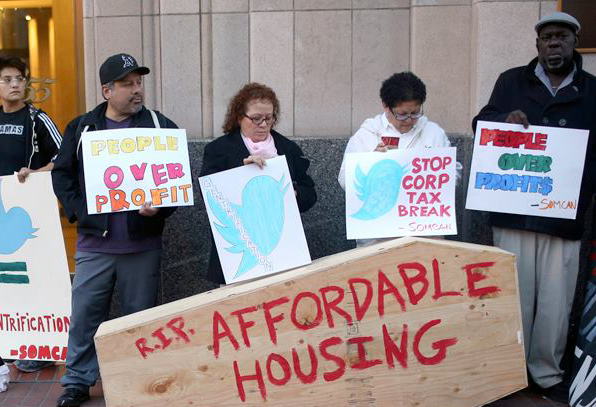 UPDATE (8/10/16): The Budget and Finance Committee of San Francisco’s Board of Supervisors tabled the Fair Share Homeless and Housing Impact Technology Tax on August 1. A number of community groups, including Jobs With Justice San Francisco, plan to gather signatures from the public and place the initiative on the ballot at the next opportunity to ensure that longtime residents can continue to live, work and operate small businesses in San Francisco.

If I asked what comes to mind when I say San Francisco, chances are the city’s vibrant, diverse culture and historic streetcars, and iconic landmarks like the Golden Gate Bridge and Candlestick Park would rank at the top of your list.

If I were to ask that question to San Franciscans, they would likely mention high rents and tech firms, and then point out the correlation between the scarcity of affordable housing and the abundance of people working for technology firms moving to their city.  Those exact dynamics explain why a campaign aiming to address the technology industry’s outsized impact on skyrocketing rents, costs of living, and instability for longtime San Franciscans and small business owners is making headlines.

Over the past few years, a growing number technology firms moved to San Francisco. As their profits soared, they naturally expanded their businesses, their headquarters, and their hiring. Thousands of people working for the tech firms moved to the city.

Inevitably, with housing demand far outpacing supply, rents and evictions surged. The housing crunch has reverberated for thousands of people who have lived in the city for their entire lives.  The current median market rent for a one-bedroom apartment in the city is $3,500. Even though San Francisco’s minimum wage just increased to $13 an hour, living on just $27,040 a year isn’t enough to make ends meet in the city.

“In the ten years I have lived in San Francisco, this city has been for sale. We are losing teachers, families, the working and middle class. My partner and I are both educators, and our combined income doesn’t give us the ability to buy a home in San Francisco.” said Maria Lourdes Nocedal.

Even those who are making significantly more than a minimum wage and working for highly-profitable corporations are feeling the pain:  One Google employee who wasn’t able to afford exorbitant rents made headlines after he resorted to sleeping in a truck.

With the rapid growth of technology corporations making it increasingly difficult for working people to remain in their homes in San Francisco, live near where they work, and contribute to their city, a few city leaders recently initiated an innovative fix.

In late June San Francisco Supervisors David Campos, Eric Mar and Aaron Peskin proposed issuing a 1.5 percent payroll tax on major technology corporations in the city to generate $120 million a year to improve and expand affordable housing projects and homeless programs.  If approved by enough supervisors, San Franciscans will have the opportunity to vote on the measure come fall.

Jobs With Justice San Francisco is leading the charge with other community groups to push more local elected leaders to support the ballot measure.  According to the coalition’s lead organizer, Kung Feng, who said in a recent interview “all of our folks are facing displacement, and this is due in large part to the tech boom that has left many of us out and left many of us fighting for our homes.”

Jennifer Friedenbach from the Coalition on Homelessness backs the measure because “to truly address homelessness in SF, we need a sustainable revenue source. And to do that we need funding.”

To create a sustainable source of new revenue, the tax burden must shift away from working families. For decades San Franciscan homeowners have been paying into affordable housing and homelessness programs through taxes and bonds.  Yet, despite their success and outsized role in the city, Mayor Ed Lee negotiated massive tax breaks for technology corporations that cost the city more than $100 million since 2013. This payroll tax would ensure that technology companies can pay more of their fair share.

With recent polling finding that “more than two-thirds of voters believe [they] need more innovative housing solutions,” the Homeless and Housing Impact Technology Tax should be welcomed by San Franciscans to help ensure more people can afford to remain in their homes and thrive.