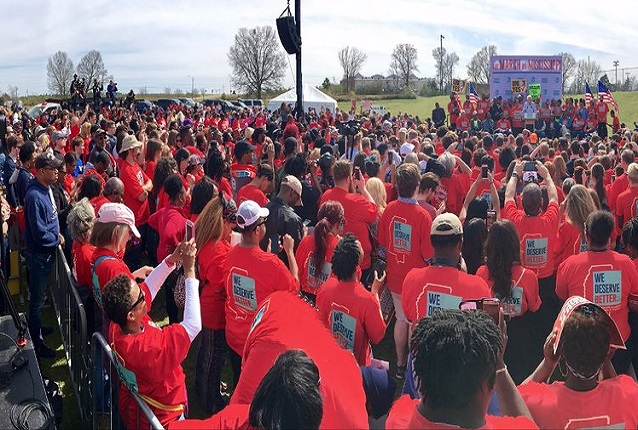 On Saturday, March 4, more than 5,000 auto assemblers, handlers, and servicers marched with their families and supporters in Canton, MS to demand Nissan respect their desire to come together in union. Nissan refuses to allow the people who work for them to have a seat at the table to voice their concerns and gain a better workplace. At the march, an active leader in the plant read a letter on behalf of his fellow members of the United Auto Workers. They called on the auto giant to stop attacking their union and threatening their families, and include them at the table to improve safety and conditions in the plant.

U.S. Sen. Bernie Sanders (I-VT), actor Danny Glover, NAACP President Cornell William Brooks and hundreds of working people, civil rights leaders, international supporters, and social justice advocates, including Jobs With Justice, converged on the automaker’s factory grounds in Canton to march in solidarity with Nissan autoworkers. Citing a pattern of civil rights abuses by Nissan against its predominantly African-American workforce, we demanded that the company respect its workers’ right to vote for a union free from fear and intimidation.

Nissan enjoys a strong customer base of people of color, and markets its vehicles to young, “urban” black and brown consumers. Yet Nissan negotiates with unions of working people in all of its plants around the globe, except for two—both with predominantly Black employees based in Mississippi and Tennessee. In addition to trying to prevent Black workers from having a say over their jobs, Nissan brazenly advertises with Breitbart—the media company notorious for its support of white nationalist ideals. In the last year, dozens of corporations have severed ties with the racist website. The automaker has yet to respond to a Color of Change petition signed by more than 10,000 Americans calling on them to stop financing the media group’s racist propaganda.

Kevin Harkins has worked at Nissan for 13 years. The father of three children who joined him on Saturday explained in The Clarion-Ledger why he participated in the march:

“It’s just simple things they could fix… we work there every day all day, and it has an effect on your body after so many years. It’s certain things — days off — small things like that they could change but they don’t. They make promises that they never change.”

Along the two-mile walk to the plant from a local park where Nissan autoworkers often cookout together after shifts, marchers passed by a large RV campsite where many Nissan workers sleep during the week before making the long drive back to their homes on days off.  “We’re glad that the company based itself in Mississippi, but Nissan can do better,” one member said.

For more information on this campaign and support Nissan autoworkers’ demands, visit www.dobetternissan.org.