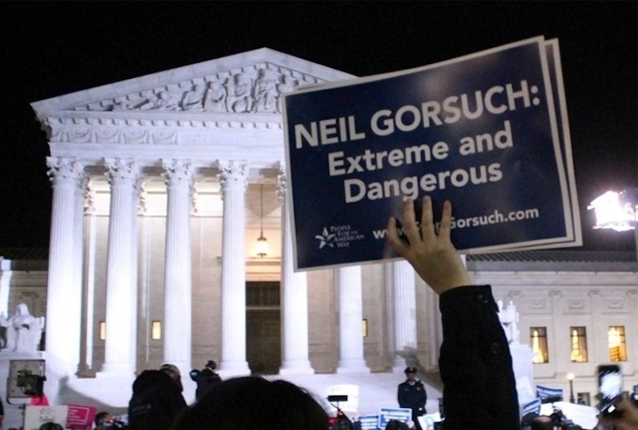 Until recently, a significant number of Democratic senators remained publicly undecided on how they would vote on Gorsuch. Progressive groups, including civil rights organizations, women’s rights groups, democracy advocates, clean money campaigners, environmentalists, and other allies urged the Senate to reject the nominee. The deluge of resistance exposed his history of bending over backward to side with big corporations.

A number of Senators demonstrated opposition due to Gorsuch’s stances against working people. For instance, Sen. Ron Wyden (D-OR) said during the floor debate: “[Gorsuch] has made it clear, in many instances, that he favors corporations at the expense of the working people.” Assistant Senate Democratic Whip Dick Durbin (D-IL) pointed out that in a fight between the religious rights of corporate CEOs and their employees, Gorsuch sided with the CEOs. And Sen. Jack Reed (D-RI) commented: “I am deeply concerned that granting [Gorsuch] a lifetime appointment to be a final authority on the meaning of the Constitution would further tip the scales of justice in favor of corporations and the powerful at the expense of working people and the powerless.”

Gorsuch received only three ‘yes’ votes from Democrats. For context, that’s the same amount of ‘yes’ votes that Robert Bork received from Democrats when his nomination was defeated in 1987. Gorsuch would not have been confirmed if his supporters did not engage in chicanery. Senate Republicans deployed the “nuclear option” to break the rule requiring at least 60 senators agree before a vote could be held. Gorsuch bypassed the block with a bare majority.

Do these margins of error matter now that Gorsuch has a lifetime seat on the highest court in the land? Absolutely. But even though the loss was difficult for progressives, the seeds for victory in the overall fight against the corporate Trump agenda have been planted.

The Trump administration, Congress and their corporate friends now know what they’re up against: a strong, vocal, diverse movement uniting against millionaires and lobbyists who rig the rules in their favor.  We’ll be watching and waiting for their next sneak attack against working people, and we will be ready to resist and armed to win.