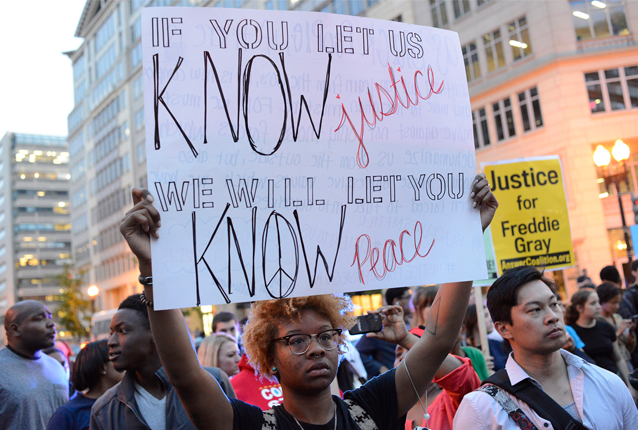 This post is second in a series about the Jobs With Justice network and the broader labor movement fight for racial justice. You can find the first post here.

DC Jobs With Justice has dedicated itself to finding the issues where racial and economic justice intersect, collaborating with local activists and community groups on a shared agenda. To learn more about their racial justice work, we spoke with DC Jobs With Justice Executive Director Nikki Lewis.

Can you tell me about DC Jobs With Justice’s work on racial justice?

We’re very clear that getting to this vision of racial, social and economic equality locally and nationally isn’t going to happen overnight. But there’s an urgent need for us to work in solidarity with community leaders who are working on police brutality and other racial justice issues right now. We know from our role models from the Civil Rights movement that we have to make a deliberate connection to the economic justice piece of it.

Throughout this year, DC JWJ has been sending out action alerts to our steering committee and our Twitter and Facebook supporters about actions and marches led by our fellow peers — whether it’s a march for Mike Brown or Freddie Gray, or if it’s about a community hearing on our local police force.

I really think that best thing we can do and can continue to do at DC Jobs With Justice and national Jobs With Justice is what we do best, and that is fostering long terms relationships between community groups and other labor groups, especially unions.

Last year around Thanksgiving, Black Lives Matter activists marched into the H Street Walmart, chanting demands for a living wage alongside calls to end racist police brutality. Have there been other events or actions in D.C. that have embraced the same intersectional view of economic and racial justice?

When the marchers all went into the H Street Walmart that day, truth be told, it was very organic. We were going to march past there and had signs, but about 100 people decided we should go in right now and peacefully show this connection. It happened in that way and it was beautiful.

Here in D.C., in large retailers like Walmart, in fast food restaurants, in service cleaning, you’re going to find a lot of people of color. You’re also going to find a lot of low wages and lack of benefits. So the leadership of DC Jobs With Justice and DC Ferguson understand the intersectionality of the value of Black and Brown lives and the devaluing of workers’ lives. With DC Ferguson, we’ve been intentional about having each other speak at events to make those connections very deliberate for the people we mobilize.

I hope we can do some sort of solidarity action together this coming Black Friday. As long as DC JWJ and DC Ferguson stay in relationship together, we’re going to be deliberate about finding those points of intersectionality.

Last year you gave testimony in support of successful “Ban the Box” legislation that would prevent employers from asking job applicants about their criminal history. Why did your organization decide to take up this issue?

In D.C., we have over 8,000 returning citizens each year, so it’s really important for this population of folks to have access to entry level jobs to be able to build skills and have a chance at a steady income. Multiple members of our coalition, primarily the Reentry Network, the Restaurant Opportunities Center, and the DC Jobs Council, were very passionate in supporting this work. Our coalition has a democratic process for identifying what our staff and resources should be focused on, and our membership specifically voted for us to act on mass incarceration and helping the re-entry community overcome barriers to employment.

As a person who worked in the restaurant industry for over 17 years, I know a lot of stories of restaurant workers facing various types of dire situations that led them to make “unsavory choices” because they weren’t able to make ends meet in an industry that pays minimum wage, or that pays $2.77 an hour plus unstable tips without any benefits or job security. I’ve seen workers come in to get their checks, and it wasn’t there or tips were short. In D.C. alone, the restaurant industry employs nearly 60,000 workers – more than half of which are women, and over 75 percent of which are Black, Latino, or Asian. So in my opinion, any problems addressed in the restaurant industry, as well as the other major industries in D.C.’s economy, should be looked at with a racial justice lens.

It would be bogus for an industry that’s rampant with wage theft to say that they don’t want to hire returning citizens with a history of stealing. It would be discriminatory toward a lot of people.  It’s a slippery slope for businesses to be able to discriminate about what types of arrests convictions they’re willing to consider for hiring purposes. The D.C. Restaurant Association was looking for a loophole, but it was inappropriate and not thoughtful in that they lacked any analysis about social systems that keep people in poverty, systems that disproportionately lock up Black, Latino, and poor White people.  The industry’s testimony against Ban the Box lacked any analysis about restaurants growing role in our economy and their power in providing employment opportunities for Americans and immigrants with serious need. And of course it completely lacked analysis about the restaurant industries overall problems with wage theft, sexual harassment, poverty wages, or unsafe working conditions, and them looking for opportunities to transform and be better in these areas.

In Washington, D.C., how would you characterize the labor movement’s involvement with issues of racial justice?

I’d say it’s mixed. Locally, some unions have deliberately been trying to build solidarity with organizations and communities of color who are impacted by police brutality or police aggression. There are some unions who have encouraged their members to turn out for Black Lives Matter actions. Some community groups went to the AFL-CIO and said they wanted to have a town hall discussion about labor and race, and the AFL-CIO supported that.

On the other hand, I think a lot of labor unions, and just people in general, are struggling to figure out their role, and how to tie it to what they’re passionate about, whether it’s collective bargaining rights, economics justice or affordable housing, and how to keep up the work they’re doing while also directly supporting Black Lives Matter and the movement for racial justice.

You participated in the Race and Labor Movement Town Hall you just mentioned. What do you think came out of that event?

I think the idea arose because some community groups here have mixed feelings about working in coalition with labor unions. Some of it is based on recent experiences, but some of it is just more historical emotions about unions being racist. This was an effort to get people thinking about how labor unions and community groups can be better partners, and to have an honest conversation about some of the barriers that are up. The AFL-CIO was willing and committed to push it forward.

It was a beautiful event—the energy in the room was high and the room was packed, the performances were moving, the panelists were honest and thoughtful, the audience was fully engaged and very diverse. But I think that we could’ve gotten even more out of the event. I think folks from unions in particular, with leadership positions or positions of privilege within the movement, were asked to have conversations with other folks in their organizations or in their communities about how they can be in solidarity with organizations of color. They were asked to have conversations about their privilege and how they may be able to harness it strategically to build power for communities of color. There is definitely room for growth and improvement, but I think a lot of people were encouraged to think from another angle.

Racial justice is such a heavy and long term transformation in our nation. This conversation was sort of a publically accountable first step. The AFL-CIO has had this message of wanting to work more with community groups, to work on the needs of citizens facing employment challenges due to mass incarceration, to support the Black Lives Matter movement. There’s been all this talk at the national level, so we wanted this first step locally.

Do you have any advice for other Jobs With Justice coalitions, community groups, or individuals who want to engage more deeply in the fight for racial justice?

Have patience in this fight with yourself and with the organizations you join, because we’re trying to figure it out together and racism is deeply entrenched in our society. It’s going to take patience and a lot of love, regardless of what path you take to get involved. Whatever your passion is, whatever brings you the most joy, you should use that talent and apply it to the movement. A lot of people are tired of seeing the same old tactics and strategies used over and over again. There are only so many hearings or marches people want to go to.

My friend is an amazing dancer and has been telling me she wants to participate in the movement but doesn’t know what to do. She ended up coordinating a performing arts concert that had a facilitated discussion with the audience at the end, and she asked me to facilitate this conversation and draw out questions of social and racial justice. We really got those individuals to think about what their vision for social justice, for racial justice in their community was. Many people who are unorganized aren’t in spaces where it’s safe to think about that. A lot of organizations working on racial or economic justice could use that creativity, that extra capacity, to keep the movement going.