Do You Hear the People Sing? A Story of Unionbusting, as Told by Orange is the New Black 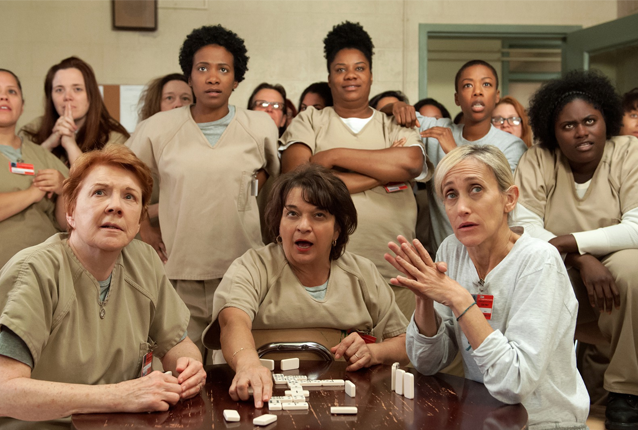 all images via Netflix

Critics have long praised “OITNB” writers for combining riveting storylines with poignant criticism of the prison industrial complex. The latest season saw the introduction of a new target of social commentary: unionbusting.

If you’re a fan of the show, you may have wondered if what unfolded was the real deal. We’re here to tell you it was. Here’s a recap of what went down at Litchfield, and how it parallels the real world:

*SPOILER ALERT* Major plot points from Season 3 ahead. Also, what to expect from the boss if you choose to organize on the job.

When MCC, a private prison corporation, takes over Litchfield Federal Penitentiary, it quickly becomes clear that no one is benefiting from the takeover—except for MCC’s profiteering corporate shareholders and executives.

MCC will stop at nothing to cut costs. They replace the inmates’ halfway-decent meals with literal bags of mush and put the women to work sewing underwear for the lingerie brand “Whispers.” The final episode of the season features the installation of bunk beds to squeeze in the hundreds of new prisoners who are on their way to Litchfield.

All of these private prison conditions are based in reality. A study by research group In the Public Interest found that 65 percent of private prison contracts set occupancy quotas or required payments for empty cells to guarantee large profits for private prison corporations. It’s also routine for prison privatizers to sell inmate labor at subminimum wages to Fortune 500 companies to pad their bottom lines. And yes, prisoners were put to work sewing underwear for Victoria’s Secret in the ‘90s.

It’s not just Litchfield’s prisoners who feel the effects of MCC’s profit-grabbing policies; the Litchfield correctional officers get the shaft, too. When their new corporate bosses slash hours and cut healthcare plans, some of the COs are forced to find additional part-time jobs to pay rent, take care of their families and cover the bills. To make matters worse, MCC hires a rash of new staff with no job experience or training, and their mistakes pile up fast.

Because MCC sneakily eliminated the staff’s union when the company took over the prison, the guards realize they have no immediate grounds for recourse. Frustrated by the deteriorating working conditions, the veteran correctional officers decide they need to band together to have a say over their jobs.

Like many workers who organize IRL, the guards are scared at first. “What happens if they fire us before we get officially approved as a union?” asks Corrections Officer Bell during an impromptu organizing meeting in the breakroom. Another guard, Ford, reminds us, “Corporations have been intimidating people since the beginning of time.”

While this is a great truth-bomb, the most astute observation by the “OITNB” writers (who are members of the Writers’ Guild of America, natch) comes in the form of a warning from their supportive middle-manager Joe Caputo who isn’t blind to his essential demotion and lost authority in the takeover:

“These guys are pros,” he says of MCC. “They will call a meeting. It will seem optional, but it won’t be. And once they have you captive, they will feed you a bunch of BS about it being a friendly workplace. And then, they are going to use scare tactics, try to convince you that you will lose your jobs. Don’t f****** listen to them. They need you more than you need them.”

The meetings Caputo describes are all too common. During union organizing drives, 77 percent of employees are forced to attend intimidating, closed-door meetings with unionbusting supervisors who try to persuade them not to join.

Even the inmates get a taste of unionbusting this season. When Flaca comes across a union flyer for the COs, she decides to organize her fellow inmates who have been working for Piper’s clandestine prison-export business in exchange for ramen-noodle flavor packets (much-needed to complement the mush MCC is serving them for breakfast, lunch and dinner).  While Flaca and her friends successfully force Piper to give them real pay, Piper fires Flaca in retribution.

Again, Flaca’s experience is way too real. Just like Piper, 34 percent of employers illegally fire people for their support of a union to send a not-so-subtle message to everybody else: don’t rock the boat, or else.

MCC, like so many large, profitable corporations (wink, wink Walmart) spends a lot of time and money working to prevent their employees from joining together and fighting for a voice at work. And while we didn’t see MCC employ any paid unionbusters, a whopping  75 percent of employers facing a union organizing drive hire anti-union consultants to block employees from organizing at work.

But “OITNB” also provides viewers a lesson in courage and solidarity. When faced with deteriorating working conditions, the guards don’t give up when their hopes for a better future seem doomed. They don’t even stop when some of their co-workers are skeptical of their efforts. And after the once-sympathetic Caputo becomes the new “Director of Human Activity” (read: the boss) and turns on the guards, they refuse to surrender their fight for stable, full-time hours, adequate training programs and affordable healthcare. They raise the stakes by joining together to go on strike.

And we’re left waiting with baited breath for Season Four to find out how the workplace drama plays out.