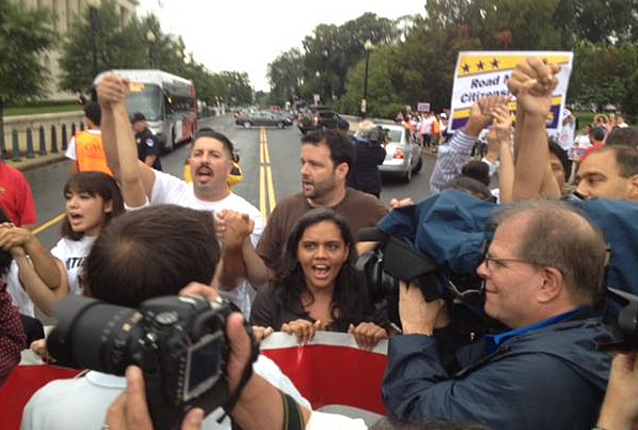 On August 1, our Executive Director Sarita Gupta was arrested in an act of civil disobedience with more than 40 other national leaders in front of the U.S. House of Representatives to send a clear message that Congress must move our nation forward by passing comprehensive immigration reform legislation that includes a pathway to citizenship and strong worker protections.

Sarita chose to get arrested to “directly confront elected leaders for embracing the status quo over the will of the American people who want a comprehensive fix for our current broken, immoral, and unjust immigration system. “

Thursday’s protest was just the beginning of the 40 Days of Action and Prayer as Representatives head home for August recess. As The New York Times explained in a must-read editorial, “it is the people’s turn to push, to be heard and, if at all possible, to move Congress in the right direction.”

Hearing that call, Jobs with Justice local coalitions are working harder than ever to educate policymakers and mobilize local activists to push for meaningful immigration reform. Be prepared for numerous actions, meetings with House representatives and workshops in your area during the next six weeks as Jobs with Justice and others from around the country demand that Congress deliver real immigration reform that includes citizenship and worker protections for all.

Here’s a sampling of what’s going on in August: