Creating Career Opportunities in Construction for Women and People of Color 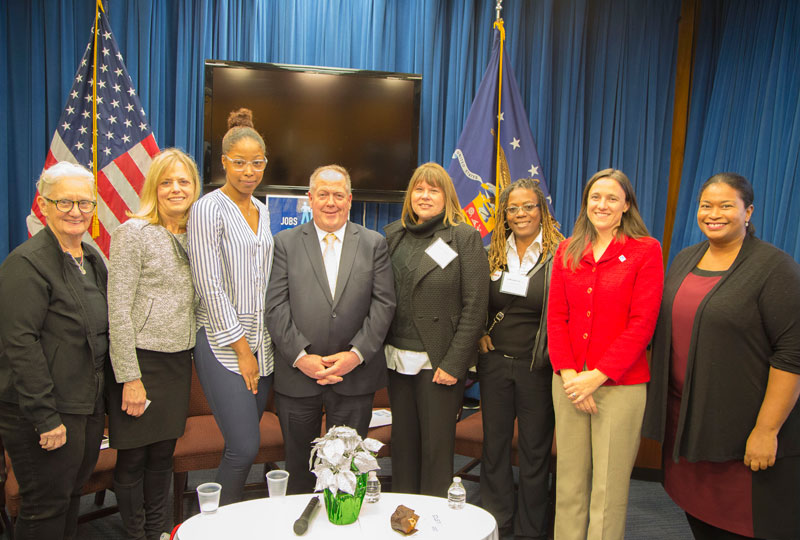 On Dec. 8, Jobs With Justice Education Fund and the Tradeswomen Committee of North America’s Building Trades Unions kicked off our joint research report, “Building Career Opportunities for Women and People of Color: Breakthroughs in Construction,” with a series of panel discussions at the U.S. Department of Labor.

“How do we get women and people of color in the construction industry?”

Tradespeople, community activists, government staff, union leaders and contractors shared their best answers to that question at a forum hosted by the Women’s Bureau at the U.S. Department of Labor this past December. The group represented some of the many construction industry stakeholders who are striving to achieve more diversity in the sector for women and communities of color.

The University of Massachusetts Boston campus and Minnesota Vikings stadium projects are just two examples of construction projects that met and exceeded targeted workforce goals for hiring women and people of color. The outcomes were featured in a recent research report, Building Career Opportunities for Women and People of Color: Breakthroughs in Construction, by Jobs With Justice Education Fund and the Tradeswomen Committee of North America’s Building Trades Unions.

Nearly 60 tradespeople, community activists, government staff, union leaders, and contractors involved in these two major publicly-funded construction projects were interviewed for the report. They advised that stakeholders must create and commit to a multi-stage plan, invest adequate resources, and collaborate to achieve the goal of increasing opportunities for women and people of color in the construction industry.

Former Director of the Women’s Bureau, Latifa Lyles, kicked off the panel discussions by corroborating the outcomes of the report. Women remain grossly underrepresented in the trades and yet the jobs are vital for women. Lyles highlighted how these jobs offer good wages, steady employment and benefits, along with opportunities for advancement. Additionally, they offer an important pathway for closing the wage gap, which is just 8.7 percent in the construction industry, compared to a typical, median wage gap of 20 percent. the Women’s Bureau supports and works in concert with enforcement agencies to increase pathways for women to address occupational segregation.

In 2009, Susan Moir of the Policy Group on Tradeswomen’s Issues (PGTI), began collaborating with a range of key stakeholders on the UMass Boston project through an Access and Opportunity Committee. Their main goal was to increase the number of women and people of color on the project. Together they developed and tested best practices, increased the transparency of data, and found that in the Boston area, improving gender diversity drove racial diversity. The committee also created walk-on procedures to attract more diversity in hiring. Projects with walk-on procedures allow for neighborhood residents to inquire about joining the project, and possibly be hired, on-site.

At the event, Harry J. Brett, Business Manager at Plumbers & Gasfitters UA Local 12, talked about his work to increase diversity in hiring and to develop a solid career track for women and people of color. Brett’s union of plumbers follows best practices around compliance. Their standing rule is whenever they get a letter that requests a special diversity requirement needed for a job, they always seek to find the people they need to fill that specific requirement.

Brett also highlighted Massachusetts Girls in Trades, a successful, statewide campaign. This effort recruited 1,000 young women from technical programs to discuss possible post-high school careers in the state of Massachusetts. In addition, Local 12 also organized an event for parents to relay the benefits for individuals who complete apprenticeship programs through the building trades: zero college debt, family-supporting benefits and wages, and a real career opportunity.

LeWanda Harper, a Laborers Local 563 journey member who worked on the Minnesota Vikings stadium project, gave her personal perspective on the project’s diversity. She commented: “I was blessed [to work on the stadium]…There were a lot of people of color there, and everyone was just happy to be making money….I’ve never seen so many black people on a job—I wanted to take a picture.”

The panelists, much like the findings in the report, offered an abundance of ideas for expanding the access and availability to family-sustaining opportunities in the construction sector to women and people of color. The outcomes of the two featured projects show that overcoming the barriers to entry is possible when stakeholders are welcoming and committed to embracing a new crop of working people. As Moir stated, “Diversity is the future of American business.”