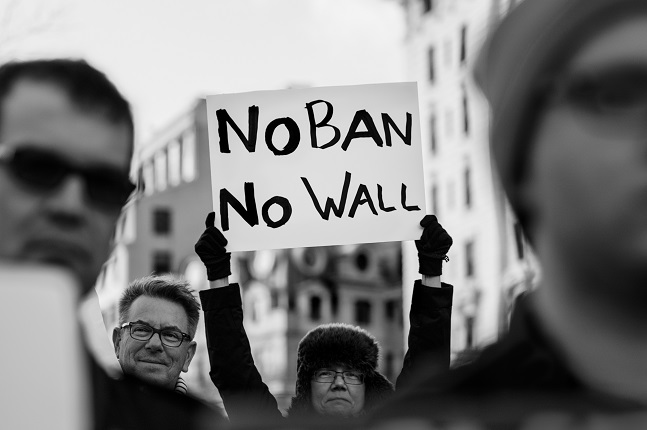 Bay Resistance called on Abbigail Brown, Founder of CPM Logistics, to publicly commit to not cooperate with or profit off of Trump’s border wall. She signed the pledge, and also pledged to be an example for other firms in the Bay Area.

President Donald Trump is desperate to make good on fulfilling one of his core campaign promises: build a border wall between the United States and Mexico. Although Congress stalled funding on Trump’s pet project, it hasn’t stopped potential vendors from expressing interest. More than 700 companies submitted bids and requests for proposal to get a shot at erecting or consulting on the project.

A recent poll revealed 62 percent of individuals oppose Trump’s wall. Americans believe it symbolizes racism, hatred, and xenophobia. Now, communities are uniting against both what a wall like this represents – and the contractors aspiring to work on it.

Jobs With Justice is part of a coalition of civil rights, immigration, labor, and community groups, led by the Partnership for Working Families (PWF), urging companies like Berkshire Hathaway to not build or profit from the wall or immigrant detention centers that divide families. profit from the wall, and dividing or deporting families. To date, 13 firms stated they would not bid on the project, including Zachry Federal Construction Corporation and Shimmick Construction Co., and several of the largest design/build organizations in the United States.

This week, protestors from Voz Workers’ Rights Education Project, Enlace and Portland Jobs With Justice rallied outside Louis Berger to push the firm to not take part in the building the wall. The Oregon engineering firm has a history of involvement in building southern California immigration detention centers.

A wave of actions like this are underway across the country and come just in time, as the Department of Homeland Security (DHS) plans to announce the companies selected to build wall prototypes in early June.

In explaining why her coalition is involved in the campaign, Deb Kline, director at Cleveland Jobs with Justice stated, “We feel that no company should be profiting from building this wall, which is nothing more than a massive symbol of hatred and racism. Companies should not be putting profits before dignity and respect.”

Nikki Fortunato Bas, PWF executive director, echoed: “It’s bad enough that Trump is focusing his energy on dividing families rather than rebuilding our country. We’re demanding that companies stand up for what is right and refuse to profit off of this politics of hate.”

Policymakers at the city, county, state and federal levels who oppose construction of the wall also are initiating solutions. Democrats in Washington promised to reject Congressional spending bills that include money allocated to building the wall. Not one member of Congress who represent states along the southwest border supports the president’s request to fund hatred.

Legislators in seven states and four cities across the country suggested boycotting and blacklisting the companies involved in design and construction. They also want to disincentivize companies contributing to building the wall by banning them from securing local construction contracts and divesting from any public pensions funds with holdings in these companies.

Since many of the corporations that expressed interest in the project are based in Texas and California, Los Angeles City Councilman Gil Cedillo will introduce a motion requiring businesses that pursue contracts with the city to overtly disclose their bids for building the wall. Failure to disclose that information would result in sharp penalties and fines.

Cedillo explained that: “Immigrants contribute billions of dollars in income and make up a significant percentage of both the workforce and business community. City residents deserve to know how public funding is spent, and whether or not they are supporting individuals or entities who are involved in the construction of a border wall that will significantly impact them and bring harm to their families and communities.”

Similarly, Councilman Abel Guillén also is “putting companies on notice.” In March, the Oakland City Council unanimously voted on a resolution against doing business with any companies interested in working on the wall. It became the second city to do so, after Berkeley. Guillén says that “building a wall does nothing to solve California’s infrastructure or immigration problems.”

DHS estimates the total cost of construction of the wall will reach $21 billion. Concerned citizens must take a stand against hate and this unprecedented misuse of resources. Make your voice heard by signing the petition to tell your local elected officials: No local money for companies that help build the border wall.