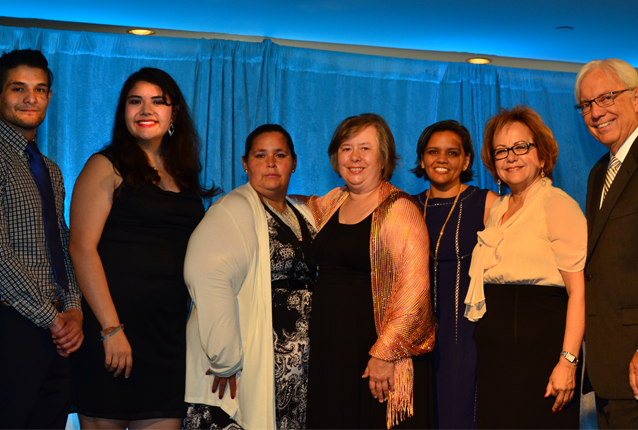 Jobs With Justice Executive Director Sarita Gupta and CNN Contributor Sally Kohn emceed the program. “It’s important to come together in moments like this when there are tragedies like Charleston on our minds,” Gupta said in her opening remarks, referencing the racially-motivated killing of nine African-Americans in a South Carolina church. “Charleston reminds us that we still have so much work to do.”

Kohn and Gupta introduced the three awardees, all of whom have dedicated their lives to protecting the rights of working people.

María Elena Durazo, General Vice President of Immigration, Civil Rights and Diversity at UNITE HERE accepted the first award for her leadership in advancing immigrant rights and opportunities. Durazo discussed the importance of collective bargaining, telling the audience, “Winning through legislation isn’t always winning…equality only comes when workers have rights they can enforce themselves.”

The worker-leaders of the San Francisco Retail Workers Bill of Rights Campaign were presented the second award for their victory in the Bay Area and sparking national attention to the problem of unpredictable schedules. Four worker-leaders were on hand to accept the award, and they spoke about why they joined the campaign and how it has impacted their lives.

“Social change occurs through two ways: osmosis and upheaval, and San Francisco is famous for the latter. We have fought for an ordinance that gives workers the ability to live the life they want to live whichever that may be and we have done so collectively and successfully and for that I am very proud,” explained Safeway clerk Michelle Flores to the crowd.

Another leader from the campaign, Sandra Herrera, concluded her speech with a call to action: “I got involved with this bill because it is important for me and many like me to be able to count on a reliable schedule that guarantees us hours. Not only for us, but also for our families, so we can raise them, spend time with them, love them. This is just the beginning and we still have a lot more to do! Si se puede!”

The third and final award was presented to Jack Marco, Chairman of the Marco Consulting Group and Jobs With Justice board member, for providing a trusted voice within the investment community on the issues facing working families. Marco spoke of the tremendous economic inequality facing the country and presented three solutions, all of which were greeted with loud applause: Roosevelt-type stimulus, a $15 minimum wage and labor law reform.

Jobs With Justice would like to thank everyone who participated in our 11th annual Awards Celebration. We look forward to our continued partnerships moving forward. If you missed out, you can pitch in to support our critical work by making an online donation.