Caring Across Generations: Reflecting on 2013 and Building for 2014 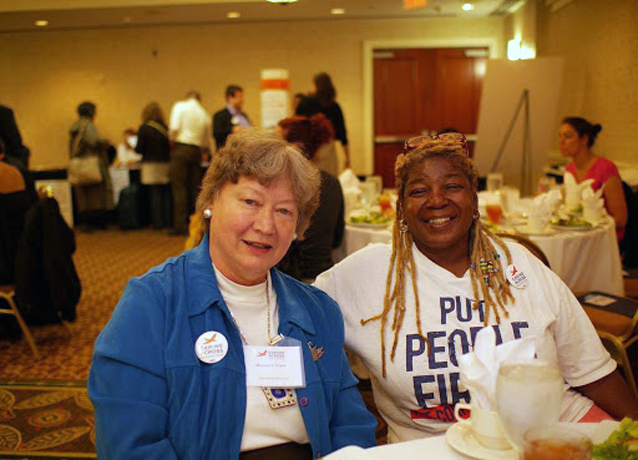 2013 has been an exciting year for Caring Across Generations – a national campaign Jobs With Justice co-anchors with the National Domestic Workers Alliance. Here are a few highlights from the past year:

On May 6 and 7,  more than 100 care workers, consumers and activists representing 26 different states came together for a congressional briefing and lobby day in Washington, D.C. They shared powerful testimony and attended more than 40 Congressional meetings. The group was joined by Senator Tom Harkin and Congresswoman Jan Schakowsky, who introduced resolutions – S. Res 128 and H.Res 197 – calling for a solution to the long-term care crisis facing millions of American families.  Since then, the advocacy work of ALIGN, Chicago Jobs with Justice, Bay Area Care Council, Massachusetts Jobs with Justice, and dozens of partners across the country has led to 15 senators and representatives sponsoring this important resolution!

Victories for Workers Achieved in States Across the Country

2014 is already shaping up to be a big year for the campaign. Here’s a preview of what’s in store:

Caring Across Generations partners across the country will be gearing up to introduce and win state long-term care policy, celebrate seniors across the country on Grandparent’s Day, September 7, 2014, engage tens of thousands of senior voters, organize and train care workers, honor family caregivers, and more. Together, we are transforming the care system in this country. See you next year on the front lines!