#BlackWorkMatters: Perspectives on Organizing for Racial and Economic Justice 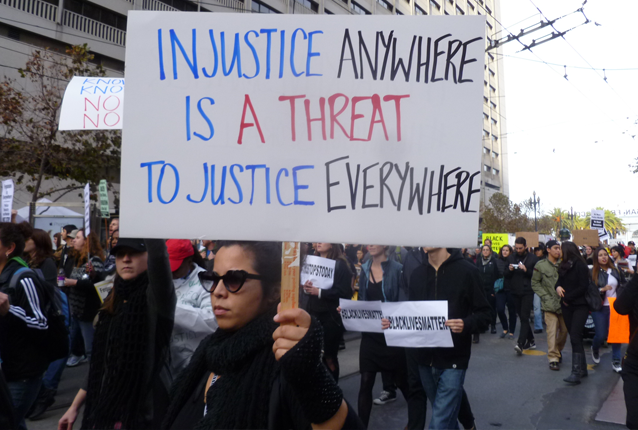 After our #BlackWorkMatters Twitter Town Hall on 9/1/16, we asked activists and organizers several questions to help catalyze our conversation about the intersection of racial and economic justice. Here are some of the responses.

What leadership is required in our movements in order to successfully advance the fight against white supremacy? Black feminist leadership is essential to the movement against white supremacy for several reasons. Most importantly being that it is intersectional as opposed to white feminism. White feminism is often problematic to women of color and exclusive to type, i.e. women who behave a certain way, dress a certain way or work a certain way. Black feminism practices inclusion of trans women, other women of color (causes and fights), the educational and lifestyle choices of other women (i.e. prostitution, stripping or “lesser” jobs as well as women with “undesirable” behavior that does not match societal norms). Also the absence of the victim card or a claim to white fragility (ex: Taylor Swift, Amy Schumer and Hillary Clinton) in Black feminism is vital to what feminism actually strives for: women’s rights on the grounds of political, social, and economic equality to men. Now with these beliefs already taken in by a person in leadership of the movement against white supremacy they can be applied where the movement is weak.

There, unfortunately, are beliefs among people in the movement that are detrimental to the cause: blatant non-support of DeRay McKesson as a leader because he is gay; Non-support of Black women as being equally or more impacted in the struggle against white supremacy; Non-support of non-Christian or Muslim Black people; The list goes on. From observation and contemplation, I can only conclude that the spread of the belief of inclusion is the most important avenue towards Black liberation.

Only with ACTUAL Black feminism and inclusion without the delusion of forced euro belief systems — homophobia, transphobia, anti-immigration, slut-shaming, classicism, colorism, mainstream/false views of feminism etc.—can Black people be moved to stop trying to fit the euro mold and leave self-hate behind and come together for true independence. INCLUSION is key because you can have diversity but not understanding of others which is in other words: Gumbo.

Also I feel that to have Black feminists in leadership that spreads feminism, the threat of the mainstream views of feminism will deteriorate, and some Black men will not feel threatened that the most educated group in the country are Black women and that the growing number of Black women opening businesses will be seen for what it is, as an opportunity and not something to be criticized. Fortunately, women and men can be feminists.

What are the ways you see white supremacy manifest within our employment and economic systems?

For me think the biggest and most obvious way white supremacy manifests itself within these systems is by vehemently denying access. There have been plenty of occasions where working in my industry it was very obvious — and sometimes even casually discussed — that beyond the fact that I was well qualified and deserving of my positions, I was an affirmative action hire. Most, if not all, of these companies I worked for had no intentions of going beyond the bare minimum requirements in diversity hiring. I don’t think I’ve ever had a job where I wasn’t the only Black person present.

There’s a “token Black” role that I’ve often been forced to assimilate into to keep my job. For me to be able to code-switch easily, to be brown but not a threatening shade of brown, to be palatable and relatable to white people; these are all privileges that give me access, privileges that many Black people do not have.

There have been occasions when during the hiring processes, other well qualified Black people who don’t necessarily fit the token Black role came in inquiring about positions they were well qualified for, and I would watch management take their resumes straight to the shredder without even offering an interview. This problem rears itself in all levels and in so many ways, through denying access to employment opportunities, housing and loan discrimination, high regulations on government assistance, etc. Respectability politics dictate that to be deserving of financial gain and growth you have to be a very specific kind of “good Black” and even if you are or if you might fit into that archetype you’re still at the mercy of gatekeepers.

What are the biggest opportunities right now for Black communities to organize and win economic justice fights? We cannot achieve economic justice without racial justice. For decades, our union has been fighting to win justice for all working people by raising wages and improving our families’ lives—and it’s clear that it’s simply not enough. That’s why we must make eradicating structural and anti-Black racism a core strategy to achieving victory in any fight for economic justice.

There is a real opportunity to win for Black workers within the Fight For $15. More than half of working people who are Black or Latino are paid less than $15 an hour compared to 36 percent of white working people. In this country, there is a problem with corporations driving down wages for everyone, but Black workers are feeling some of the largest inequities. We can improve economic outcomes by continuing to organize in our communities and our workplaces to end poverty wages. We’ve seen mass demonstrations and real wins through the Fight for $15 where 20 million have won raises and 10 million are on path to $15.

What propels and inspires you to continue working at the intersection of economic and racial justice? As a union leader, I see the links between inequality and race show up in the lives of our members and the workers that we help organize. Black people have been systematically denied access to equitable housing, education, safe communities, employment, livable wages, healthcare, voting rights and full access to democracy for most of this country’s history.

I believe the continued dehumanization and exploitation of Black, Brown, Asian and Native people are vital to the persistence of economic disparities. Racism and racial anxiety are regularly used to hijack our economy, our democracy and our government to the benefit of those on top, and to the disadvantage of the vast majority of people, including white people. Therefore, we must reject the notion that if we take care of economics everything else will fall into place, including racial injustice.

I remain inspired to work at the intersection of economic and racial justice because it matters to me, my family and members of the union. At our Convention, SEIU members enthusiastically passed a resolution on racial justice recognizing that economic equality and racial equality are tightly bound. We made a commitment to become a fully anti-racist organization and dismantle structural racism. I made a commitment to be part of this journey; working consistently and fearlessly to achieve victory and I intend to do that.