Atlanta Fought for $15 and Won 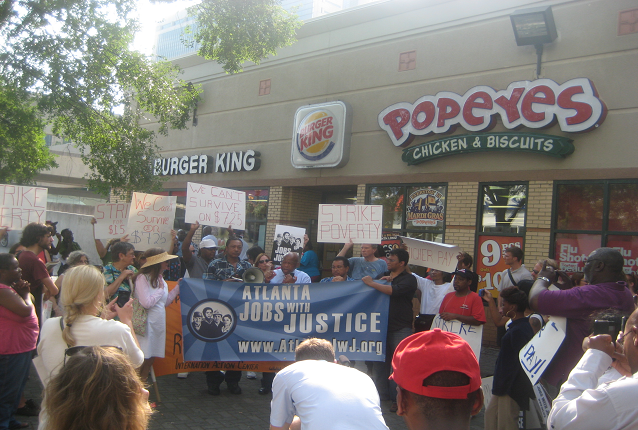 People working for the city of Atlanta received welcome news as the City Council unanimously passed a budget raising their wages. Starting on July 1, 2017, base pay for city employees will rise from $10.10 to $13 an hour. Even better news? By mid-2019, all city employees will earn a minimum of $15 an hour.

Now more than 1,000 people who sweep the city streets, maintain local parks, and put out fires will have a better chance at making ends meet. And this raise happened thanks to Atlanta Jobs With Justice.

The coalition of labor unions, community groups, faith-based organizations, student organizations, and individuals is on the front lines of organizing Atlantans to achieve economic and social justice.

In 2013, Atlanta Jobs With Justice held the city’s first Fight For $15 rally in support of brave men and women in the fast-food industry who went on strike to speak up for family-sustaining jobs. The event launched the coalition’s community-wide efforts to secure a long-overdue raise for those who make Atlanta work.

The wage increase is a notable development given that a study released this month showed a working person in Georgia needed to earn at least $16.79 an hour to afford a two-bedroom apartment. The poverty rate of neighborhoods a stone’s throw from Atlanta’s City Hall approaches 70 percent.

A $15 wage means working people may no longer have to worry about getting evicted in a city with skyrocketing rents. The boost offers peace of mind for families wondering if they’ll have enough to feed their children, pay for transportation to and from work, and keep the lights on.

Most of all, it offers hope for a better life. As Neil Sardana, Atlanta Jobs With Justice coalition coordinator, shared, “Now with this vote, city workers can see a brighter future that provides for their basic needs, especially as the cost of living in the city has been rapidly increasing.”

PACE Atlanta president Gina Pagnotta Murphy spoke to Bloomberg and celebrated the win. “It was the first time in a long time that the city came together in solidarity for city employees to make this victorious win.”

Economic progress is hard to come by in the South, and Atlanta is no exception. Georgia’s state minimum wage is just $5.15 an hour. The triumph for city employees represents the first step in the clarion call to ensuring everyone in the Peach State earns a fair return on their work.

Up next, Atlanta Jobs With Justice has its sights set on improving wages in other municipalities in the metropolitan area and for people working for the state of Georgia. “Let this victory tell all working people that we must continue our fight for progressive values and our community’s needs in spite of the recent surge in conservative ideology,” Shannan Reaze, executive director of Atlanta Jobs With Justice.

Victory in Atlanta is one more reminder than when working people come together; we win.