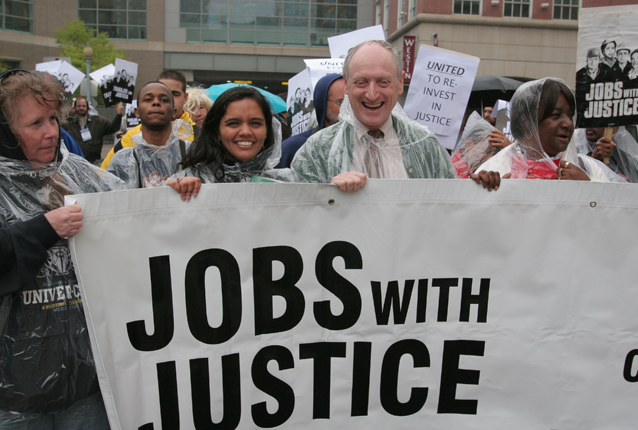 Paul Booth was a dear friend, a steadfast supporter, a longtime advocate, and a thought partner to the Jobs With Justice network. Paul was an organizer of organizations, campaigns, and coalitions. He opened the door for countless students, anti-war activists, citizen organizers, and working people to assert their voice in our democracy and economy. A leader in AFSCME for four decades, Paul’s unwavering dedication to the labor movement was felt by all who crossed his path.

Paul leaves a lasting impact on our movement as a strategist, a passionate social justice activist, a connector, and a true mentor. It is his legacy of mentorship, his commitment to leadership development, and lifelong work advancing a power-building strategy for justice that inspired his family to create the Paul Booth Rising Leadership Project.

The Paul Booth Rising Leadership Project will support and strengthen emerging leaders as agents of progressive social change. Working together to honor the legacy of Paul Booth and the three organizations that he deeply about – Jobs With Justice, Midwest Academy, and Restaurant Opportunities Center—ROC United – the Project will create training, internships, mentoring and guidance for emerging leaders.

Help us sustain Paul’s tradition of nurturing and cultivating a pipeline of movement leaders by contributing to the Rising Leadership Project in his honor today.

The Rising Leadership Project will pay tribute to Paul’s vision by creating support and leadership development paths for working people and organizers who are on the frontlines of fighting for social justice. Your contribution will help take existing leaders, members, and organizers to the next level and support those who seek long-term careers in the field, whether in community or labor organizing. The mentorship program is still being developed, but if you are interested in receiving more information about becoming a mentor, mentee, or donor fill out this form.