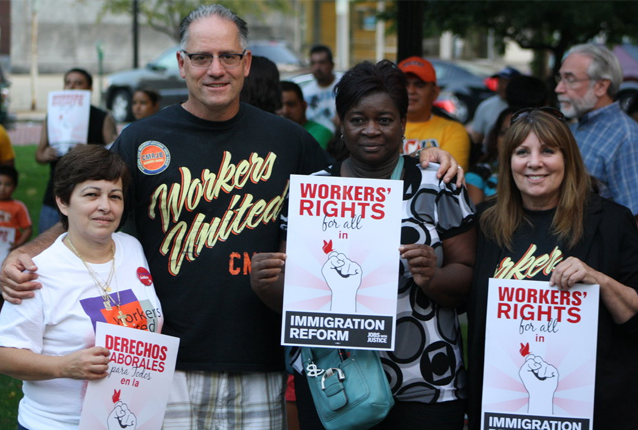 Economic anxiety led to the rise of populist movements across Europe and the United States. Nativist impulses and migrant scapegoating galvanized them. But to tackle core problems – unemployment and stagnant wages – multiracial, populist, progressive change is necessary.

Often, white people working in the United States vent their economic frustrations by resorting to racial backlash and violence. Economists and labor activists call for working class alliances between blacks and whites around their common interests, as a way to strengthen labor demands and decrease racial animosity. That was the argument made by Sadie Alexander, the first black U.S. economist. She saw parallels between the rise of racial hostility and fascism in Germany during the 1930s and the effects of economic insecurity on racial tensions in the United States. Alexander worried that the loss of jobs at the end of World War II would prompt unemployed whites to lash out against more vulnerable groups as they had in earlier economic downturns. Given that prospect, as well as ongoing racial discrimination in hiring and firing, she called for the federal government to provide full employment for all citizens who were willing and able to work. On fascism, Alexander also feared white Americans would be willing to sacrifice freedoms and civil liberties “in exchange for the vain promises of a self-proclaimed Messiah” who claimed that he could fix all of their economic problems.

Sadie Alexander’s concerns have come to fruition with the election of President Donald Trump, and the animosity that he stoked during his campaign. Among those he blamed for undermining law and order or national security are unauthorized Mexican immigrants, Muslims, and inner-city black Americans. He also blamed “illegals” for stealing jobs. As president, Trump continues to engage in vitriol that demonizes these groups. He proposes policies that violate Constitutional rights, including unreasonable searches and seizure, due process and equal protection.

Although Trump’s election resulted from broad-based support from white voters, his economic message especially appealed to working class whites who believed false promises that he could bring coal and manufacturing jobs back to the United States. The prospects for large-scale coal production are slim, given low-cost alternatives, the desire for cleaner energy, and automation. The latter category makes it unlikely that the manufacturing sector will generate enough jobs to employ large numbers of displaced working people.

In the many sympathetic post-mortems following the 2016 presidential election, we read a great deal about the economic problems of rural, working-class whites and others who face financial uncertainty in Rust Belt factory towns. Their concerns span over 40 years and are due to structural changes in the economy with the decline in manufacturing and growth in lower-paid, non-union service jobs.

Although these policies and changes have been more devastating to blacks who live in industrial cities, their stories have received less sympathetic treatment in media coverage. Black working men and women are disproportionately affected by deindustrialization because of their concentration in the automobile, steel, and rubber industries that were hardest hit by plant closings. Finding jobs has been especially difficult for urban blacks because of residential racial segregation. The vast majority of new jobs in metropolitan areas are in suburbs and exurbs where few African Americans live or have networks that provide access to jobs. In both good and bad economic times, black people suffer unemployment rates that are twice as high as rates within white communities. Additionally, a recent study by economists Valerie Wilson and William Rodgers III found that since the late 1970s, real wages for blacks at every percentile grew slower than for whites, indicating that the trend of growing income inequality hits blacks harder than whites.

Economic despair felt by middle-aged, working-class whites contributed to growing use of opioids and early deaths. It’s a problem familiar to those who live in our nation’s inner-city slums. This moment is ripe for labor activists to facilitate a grassroots, interracial movement that brings together people from communities experiencing economic distress around their shared concerns. One major area of distress is the lack of access to jobs that pay livable wages.

Economists Darrick Hamilton and Sandy Darity, Jr. laid out a bold plan for a jobs program that would alleviate many of the problems these communities face. They propose that the federal government provide work opportunities as a right of citizenship – a federal jobs guarantee program. (This, of course, means that we also will need comprehensive reform that provides a viable path towards citizenship for unauthorized immigrant men and women.) It would provide employment for adults who are out of work, with benefits and minimum pay thresholds based on skill. States and localities determine the jobs based on their assessment of community needs; federal monitoring would ensure that states provide gender and racial-ethnic equity in access to jobs. The goal is to provide tax revenue, stimulate local businesses through a multiplier effect, and reduce government spending on a number of social insurance programs such as unemployment compensation. The program would also enable us to invest in infrastructure repairs, renewable sources of energy, training for innovative jobs of the future, and endeavors that beautify landscapes and create careers for those in the arts.

Conservatives who favor individual responsibility and work opportunities and progressives who favor redistributive policies of economic justice should support it. It won’t be easy convincing the white working class that full employment for all citizens is a worthy goal, but it’s possible that shared misery might provoke such an awakening.

Nina Banks is an associate professor at Bucknell University and serves on the advisory committee of the Labor Research and Action Network (LRAN).

Scholars, labor practitioners, and activists from across the country will convene at the 2017 Labor Research and Action Network (LRAN) Conference at Howard University on June 8– 9 to share news, ideas and lessons learned about building alliances among working people, and to develop an offensive strategy against policies that pit them against each other.