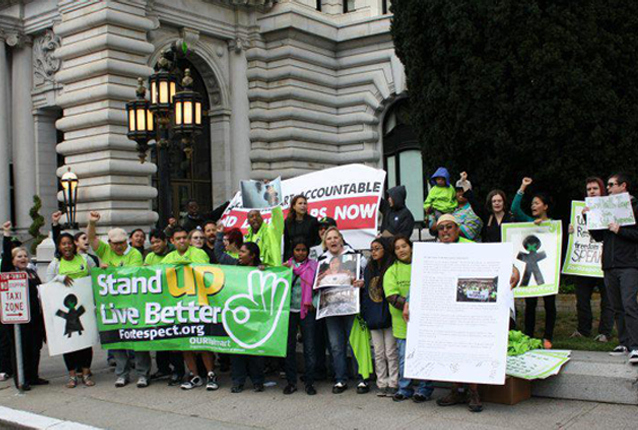 Last week, 99% Power launched the shareholder spring with a week of action targeting Wells Fargo, Walmart, Bank of America and Sallie Mae as key examples of how the corporate 1% devastate our communities, lives, and the planet.  The week of action demanded that these corporations renegotiate their debts to workers, homeowners, students and the environment.

Starting on April 23rd, homeowners and students descended on the Wells-Fargo shareholder meeting in Salt Lake City where the company was trying to hide after last year’s protests.

The next day, workers at Walmart held their first national day of action since last year’s historic Black Friday strikes. Hundreds of Walmart workers were joined by community allies for actions at 200 stores to demand that Walmart honor its public commitment to be more consistent, transparent, and fair in scheduling shifts and hours for workers. While members of Organization United for Respect (OUR Walmart) and community supporters leafleted customers, talked to workers, and met with store managers, over 10,000 people took action in solidarity online.

The collective display of action had immediate impact: on the very same day, Walmart posted an explanation of why workers have yet to see changes in their stores despite the fact that the company made a public commitment to addressing these scheduling issues four months ago. In the post, Walmart claimed that it had initiated a pilot program in two cities and laid out a timeline for expanding the program. While such statements demonstrate that workers are building real power that Walmart can’t ignore, OUR Walmart has pledged to remain vigilant to ensure that Walmart keeps its promises.

Meanwhile in the Bay Area, San Francisco Jobs with Justice led an action with Bangladeshi workers and activists, Kalpona Akter and Sumi Abedin, as well as local Walmart workers to confront Walmart board member Aida Alvarez about the need for Walmart to take responsibility for the deadly fire that killed 112 people in the Tazreen garment factory last year.