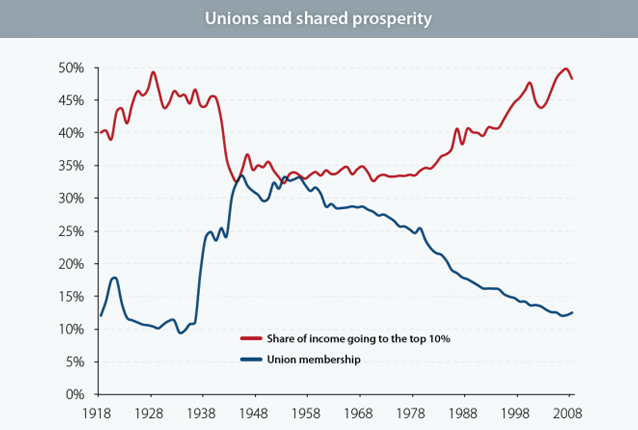 Evan Soltas would like you to know he read a book about unions. In his recent Bloomberg View column, Soltas ponders the thesis of Richard Freeman and James Medoff’s seminal book What Do Unions Do? and concludes that unions don’t do much in today’s economy.

As Soltas notes, Freeman and Medoff boil down the functions of unions to two main points: 1. They serve as a check-and-balance on employers. 2. They ensure workers have a voice on the job. These two functions, from a macroeconomic perspective, allow workers to earn higher wages and better benefits, which serves to reduce income inequality. This important fact is supported by research demonstrating that the growth in inequality corresponds with a decline in union density.

The loss of unions, in Soltas’s opinion, is a natural and unavoidable outcome of a global economy. Soltas argues that U.S. policy makers (and, presumably, workers) should not worry though because the check-and-balance on employers provided by unions comes too much at the expense of non-union workers and that other forms of worker voice are preferable.

First, it is naïve to think that unions simply have run their course. Our broken labor law makes it incredibly difficult for workers to form unions. Without any real penalties to fear, employers have an economic incentive to violate federal labor law. Research shows that indeed they regularly do, using a variety of often unlawful tactics to coerce and intimidate workers during union organizing campaigns. (And, as we saw in Chattanooga, even when an employer respects the right of workers to decide on union representation, anti-union politicians and front groups are quick to fill the void – threatening the workers with a loss of work and economic subsidies should they elect to join a union.) Soltas doesn’t even consider the ramifications of broken labor law.

Soltas also misses the boat on the other points he raises.

Unions protect the interests of all workers. In politics, unions stand as the only formidable bulwark against the flood of corporate money that flows in a post-Citizens United world and the anti-worker agenda it supports. To name just a few examples, unions consistently advocate for expanded access to health care, the protection of Social Security and Medicare and a more fair tax code. Unions are vital to shaping and supporting the very type of policies – including broader protections for worker voice! – that can help reduce inequality. We also know that the presence of unions can raise standards for non-union workers in similar industries and nearby locations. Simply offering workers more ways to have a say in the workplace won’t replace these important functions.

Unions are also necessary if public policy is going to effectively promote worker voice. Works councils and other non-union mechanisms can only succeed if workers have, under the protection of law, the ability to band together and engage in self-directed concerted activity – or put more simply, if they can form unions. It is fine if workers can exercise their voice in a non-union setting. However, without the right to form unions and engage in protected activity, workers run the risk of employer-dominated processes that may provide them a proverbial seat at the table without an ability to make the boss listen.

I give Soltas credit for acknowledging the importance of worker voice in making a better economy, one that works for everyone. However, he is mistaken to believe that worker voice can be promoted, protected and effective without the presence of unions.

Update – 2/21/14 : Evan Soltas replied to my critique of his assertion that unions aren’t necessary. I want to reiterate my appreciation for his willingness to consider the importance of worker voice in public policy. With that said, I still don’t believe his reply fully addresses the issues that I raised. It may be that we agree to disagree, but in the spirit of well-intentioned debate, I offer the following thoughts on his reply:

1. On the question of the future of unions, larger economic forces have certainly made it more difficult for unions to regain density. Global competition is one of them, as is the U.S. economy’s shift from manufacturing to retail/service, a historically non-union sector. These forces create unique challenges for workers trying to form unions today, which they are still very much trying to do. To give just one example, the NLRB received over 3,000 requests for union elections from nursing home and non-acute care employees in the last decade.

Given that workers are still trying to organizing unions, one must ask why they don’t succeed. The answer, as Kate Bronfenbrenner describes convincingly in detail, is intense employer resistance. Much of this resistance violates federal labor law. Employers also commonly use procedural delays to lengthen the union election process.

Why do employers do this? They know that these tactics are effective in limiting successful union organizing, and they come at little expense, given the NLRA’s lack of financial penalties beyond potential back pay. (Farber and Western themselves point out that procedural delays are a particularly effective unionbusting strategy.) This is not a natural outcome. It is the result of a deliberate decision to not address the deficiencies in our labor law.

2. I still don’t see how we get to policies like full employment, which Soltas believes will address inequality better than unions. Who, if not unions, has the resources, both in terms of money and supporters, to support this policy agenda and take on any opposition to it? And assuming these policies become law, who ensures that future administrations and congresses do not repeal them or render them ineffective? Unions aren’t just a check-and-balance on employers in the workplace. They also serve as a check-and-balance on corporate power in politics. That’s one reason why they matter for all workers, union and non-union.