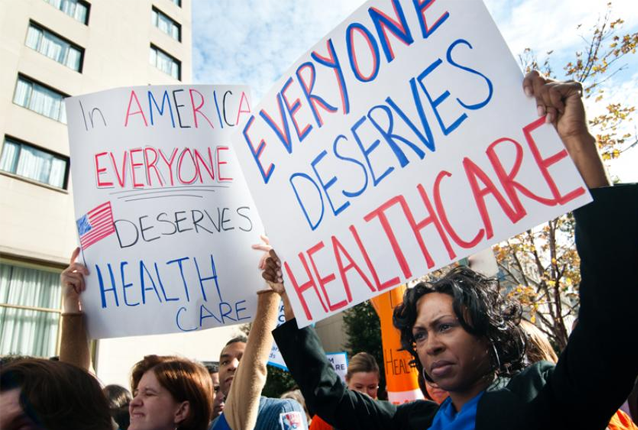 When Donald Trump was elected president, some pundits rushed to assure us that the American constitutional system would prevent Trump from enacting the most extreme parts of his corporate agenda. The events of the last few weeks show that working people cannot sit back and trust that our elected leaders will use meaningful checks-and-balances to stop Trump. Instead, we must redouble our efforts at resisting Trump in the streets, on the phones, in congressional offices, and wherever else we can.

Remember, our nation’s founders set up a democratic system to govern the United States. They did so in contrast from the British Parliament, where the Prime Minister must have the support of the majority of the legislature to stay in power (and thus has effective full control over the government during his or her time in power). In the United States, the executive and legislative branches are separate from each other. The majority in Congress—even from the same party—are not beholden to the president. Today’s actions from the House of Representatives show a rebuff of this system.

In a 217 to 213 vote, the majority of U.S. Representatives passed a bill repealing crucial parts of the Affordable Care Act (ACA), and giving a giant tax cut to billionaire corporate CEOs. The bill guts Medicaid, cuts off health care for those who earn low wages, hurts women disproportionately. If enacted, the legislation could bring back lifetime caps on how much an insurer reimburses for healthcare costs, shutting off people’s health insurance when they need them most.

Many GOP members voted for the bill despite their disagreement over it, including the bill’s provision to allow insurers to charge Americans more for pre-existing conditions. So, why did Republicans overwhelmingly support a bill they know is bad policy? Congress abdicated its role to independently decide whether to pass legislation for the sole reason of granting Trump, in the words of CNN, “a big win.” So much for the separation of powers acting as a check on Trump’s extremist agenda.

The founders also set up a Senate to be a smaller chamber where cooler heads could debate the issues of the day. In fact, the term “Senate” derives from a Latin word meaning “council of elders.” Senate Democrats sought to invoke the power of the Senate to prevent Neil Gorsuch from getting a seat on the U.S. Supreme Court, due to his dangerous judicial record standing for corporations and against ordinary citizens. The Senate had a chance to preserve its role as a deliberative body that allows members the right of unlimited debate. Instead of debating Gorsuch, they unanimously voted to break the rules of the Senate to confirm Gorsuch and hand Trump another win over working people. So much for the Senate acting as a check on Trump’s corporate agenda.

The founders also set up a cabinet that, although nominated by the president, to function with a degree of independence. They wanted cabinet members to act as unbiased government officers that provide advice to the president. Indeed, Article II of the Constitution states that the president “may require the opinion, in writing, of the [cabinet] upon any subject relating to the duties of their respective offices.” The 25th Amendment to the Constitution also gives the cabinet, along with the Vice President, the initial power to decide whether a president “is unable to discharge the powers and duties of his office.” In fact, they thought cabinet officials were so important that they did not give the president the sole power to appoint them, requiring that they receive Senate confirmation before assuming their roles. This week, Trump’s nominee for Secretary of Labor was sworn in to head the Labor Department. During his confirmation debate, R. Alexander Acosta made it clear that even though the mission of Department of Labor is to assist working people and protect their rights, when there was a conflict between what was good for working people and what Trump wanted, Acosta would be Trump’s man. So much for the cabinet acting as a check on Trump’s corporate agenda.

So what’s left? With the institutions of government unable to act as the check on Trump that the founders imagined, working people must step into the void. Together, we have the power to stop Trump and take back our democracy. Working people came together to thwart Trump’s first nominee for Labor Secretary, Andrew Puzder from taking office, and delayed several parts of Trump’s plans. We must use today’s loss to redouble the effort to stop the ACA repeal from moving in the Senate. We must also use our people power to block more of the Trump corporate agenda from advancing in the coming year. And we the people must offer a different vision for government that lifts up the needs of our citizens and our communities.