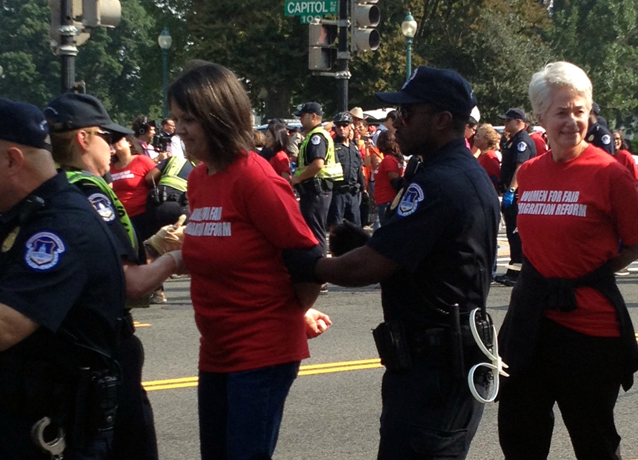 Jobs with Justice leader Deb Kline was arrested today in front of the U.S. Capitol in an act of civil disobedience demanding Congress take action to pass immigration reform that will treat women and children fairly.

Approximately 100 women – including undocumented immigrants and Deb Kline from Cleveland Jobs with Justice formed a blockade at the intersection between the U.S. Capitol and the House office buildings.

Prior to the arrests the women held a press conference to discuss the impact immigration has on their roles as mothers, workers, community leaders, and more.

Kline explained that she came to Washington, D.C, to make her voice heard because, “We have seen too many mothers in Northeast Ohio ripped apart from their families and too many workers exploited.  We’re demanding Congress move forward on comprehensive and inclusive immigration so that women working to support their families will no longer be left vulnerable by immigration.”

The event was organized by We Belong Together, a national campaign to bring forward the priorities of women in immigration reform.

You can learn more about today’s action on Twitter at #HouseUnited and #WomenTogether.

Tags: We Belong Together