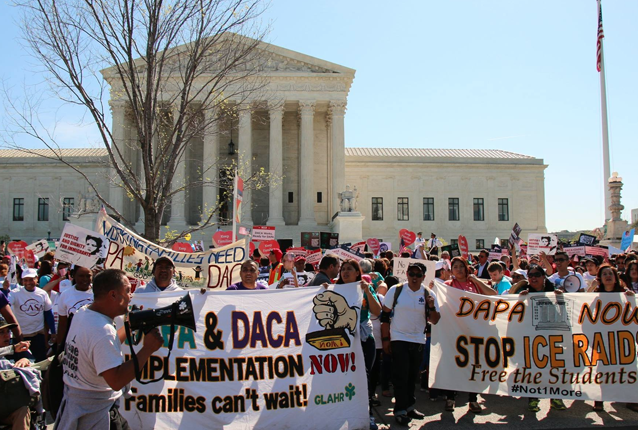 The U.S. Supreme Court heard oral arguments this week in the case of United States v. Texas, a case that will determine the fate of the most significant immigration initiatives in decades. These initiatives are essential to workers’ rights and to millions of working people across the country.

The case aims to stop core elements of President Obama’s executive action on immigration issued in November 2014, which would grant deferred action through the DAPA and expanded DACA programs. The administration was set to increase the number of immigrants and children allowed to stay in this country. While no substitute for comprehensive immigration reform, the administration’s policy would allow millions of people to apply for work permits and relief from the threat of being deported away from their families and communities. The ability to work with status is the single most important job-related protection for immigrants, as it prevents employers from using the threat of immigration enforcement to exploit and retaliate against their employees.

Deferred action initiatives like DACA and DAPA would potentially have a ripple effect on many more than just those waiting to directly apply to the programs. There are currently thousands of men and women who work for low-road employers and are silenced because they aren’t protected from retaliation when they blow the whistle about wage theft and dangerous working conditions.

Employees like those who work for Tito Contractors know how difficult it is to fight for unpaid wages, to come together for real improvements at work and to stand up to the threat of immigration enforcement from your employer. DAPA and expanded DACA would go a long way in eliminating this vulnerability while continuing to push for a path to citizenship, meaning more employees would have a better chance to negotiate with their employers.

Until this case is decided, millions of families continue to live in legal limbo, in constant fear of separation, and without any certainty as to when they might be on solid footing to support their families and contribute even more to our country.

As oral arguments began, thousands of people stood together rallying in front of the Supreme Court today to demand the justices #unfreezeDAPA. Community advocates held similar events in 20 cities across the country. It’s important that working people join forces with them in support of the call for better workplaces, better communities and better lives.