We All Subsidize McDonald’s Low Wages. Here’s How to Change That. 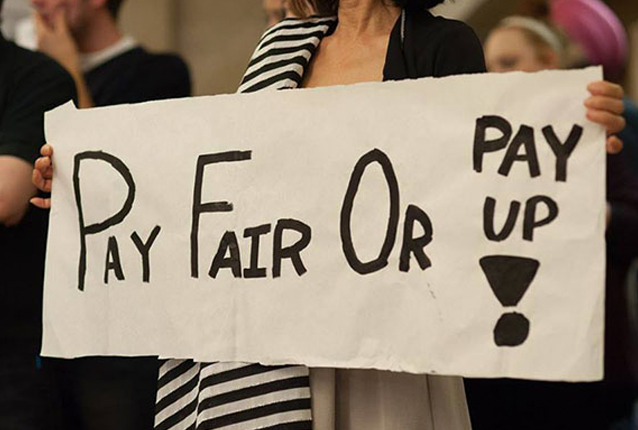 Melissa Benjamin is a mom of two from Denver who has worked as a home-care provider for more than 16 years. Melissa has wanted to be a caretaker since she was young, as she watched her mother help rehabilitate her severely injured brother.

“You know that feeling when you get really sick? When you’re stuck in bed and nobody is there and you can’t get up? I take care of people when they are in that situation. And by the time I leave, they are feeling better and very thankful,” Melissa said.

Even though Melissa has 16 years of experience caring for others, the money she earns as a nursing assistant has never allowed her to adequately take care of and provide for herself and her family.

Across the country today, communities are joining forces for another significant day of action for the Fight for $15 to ensure everyone has the ability to make a good living and lead a good life. And Melissa is right there with them. While many underpaid individuals who work in the fast-food industry are on strike, thousands of adjuncts, home-care providers, airport and manufacturing employees, retail associates and their supporters are also coming together for a fair return on their work at events in more than 300 cities nationwide.

And this movement has already yielded incredible results. Just in the past few weeks alone, New York boosted the minimum wage by up to $15 and secured significant raises across the rest of the state. California also locked in a raise to its minimum wage to $15 by 2022, and a $15 ballot measure in Washington, D.C., is now moving forward.

The sweeping protests this week will continue to pave the way for those working hard to create a better future for themselves and the next generation.

At the center of many of the actions is McDonald’s. The biggest fast-food company is among the most critiqued in the nation for shirking its responsibility to its workforce. After 28 years of working at McDonald’s, Rachelle Bainter can’t afford health care and depends on Medicaid and Medicare to cover her medical bills. In its most recent quarterly earnings report, McDonald’s made a record $1.3 billion in profits. Yet taxpayers are shelling out $1.2 billion per year in public assistance for McDonald’s employees like Rachelle who aren’t paid enough to live on without food stamps and other public support, according to a report from the National Employment Law Project.

The McDonald’s way of doing business doesn’t just impact McDonald’s employees – it influences how other companies operate as well. Indeed the problem of offsetting labor costs onto the public isn’t limited to McDonald’s. According to a recent study, working families access safety-net programs at a cost of more than $150 billion annually to federal and state governments. Working people are the ones who subsidize a handful of highly profitable corporations like McDonald’s by paying for health care, child care and other critical services that their fellow community members turn to when they aren’t compensated enough to get by.

In addition to mounting campaigns for better wages, some communities are pursuing innovative solutions to hold McDonald’s and other corporations accountable for chronically underpaying their employees. They’re rewriting the rules so that profitable companies are required to either make sure working conditions allow people to make ends meet or else pay a fine to cover the cost of low wages on society. Creating these rules would supplement the costs of health care, child care and other critical public programs people need to sustain their families. And on a greater scale, these efforts would shift the paradigm so that more profitable corporations have an incentive to invest in our communities and our futures.

Colorado Jobs With Justice is part of a coalition that launched a campaign last week in support of the Corporate Responsibility Act. This legislation would levy fees on large employers that pay unsustainable wages and provide no health insurance. The money recouped from these companies would pay into a fund to support Medicaid and care needs. The fund would be overseen by working people and other community leaders.

In Connecticut, a coalition is also working to advance the Low Wage Employer Fee, which would charge big businesses a fee when they do not pay their employees enough to lead a decent life. The revenue collected would go toward the $486 million worth of public services that working moms and dads and others in Connecticut rely on when their paychecks simply aren’t enough to cover the basics. Last year, this coalition, backed by Jobs With Justice, successfully pushed for the establishment of an advisory board, which will be comprised of working people, employers and others to make recommendations to the state in addressing issues created by low wages.

And in Cook County, Illinois, support is growing for the Responsible Business Act, which would also create an incentive for large employers to take responsibility for their own labor costs and provide critical revenue for services that working families depend on like child care, health care and affordable housing.

Americans shouldn’t have to pick up the tab for profitable companies that don’t want to play by the rules. It will undoubtedly take a team effort to stop a handful of big corporations from ripping off taxpayers, communities and working people who are barely scraping by. Yet given the progress of the powerful Fight for $15 movement, and new promising legislative solutions afoot, we are seeing signs that by standing together, we can get our country and economy moving forward again.