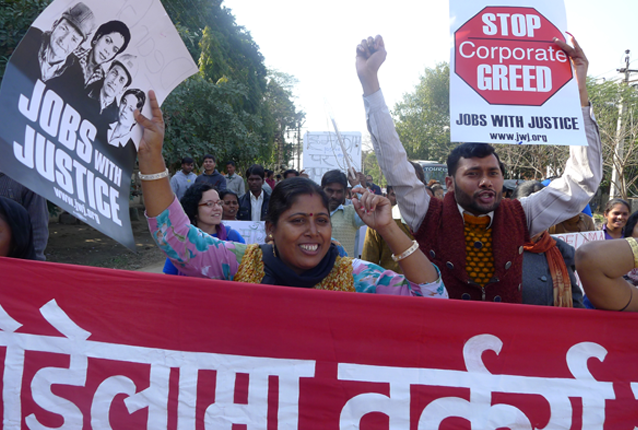 Workers at the Modelama garment factory in Gurgaon, India, protest after 17 workers were fired after forming the Modelama Workers Union. This type of retaliation is common in the garment industry, where very few workers are organized. Workers called on delegates from the United Workers Congress (UWC), who had organized a fact-finding mission, to use their power to hold US-based Gap Inc. responsible for upholding the right to organize for all workers–permanent and contract workers–on its international supply chain. UWC representatives committed to exposing and stopping worker retaliation abroad and at home.

The area outside of the factory was bustling with activity from garment workers, traffic from the busy street, and pedestrians.  Textile workers and allies were passing out hundreds of fliers to passersby.

There were trucks parked just to the side of the protestors. A garment worker informed me that management had intentionally placed the trucks there to try to block the presence of the protesting workers from the general public.

Although the truck seemed to block the view for some of the traffic, it ultimately caused a bottleneck around the protesters, creating more excitement and activity in the area.

The Modelama factory employs over 1,200 garment workers and is a supplier to Gap Inc.  Workers have been organizing a union at the factory. In order to stop the union organizing drive, 14 workers and union leaders have been fired and 3 were transferred to a different site.  The dismissals and transfers have been accompanied by forceful pushing, illegal confinement and threats to family members on behalf of Gap supplier Modelama Exports.  The retaliation against workers has been used to undercut the worker’s legal and human right to freely associate and form a union of their choice.  The blatant nature of the firings and Gap’s complicit support of the action left our delegation deeply concerned.

The garment workers have a presence every day outside of the factory and are calling on Gap Inc. to immediately address this violation of the freedom of association.

Our delegation will return to Gurgaon to follow up with the garment workers.  If Gap Inc. continues to support the illegal firings, we will take further action in India and back in the US.

Take action: Sign the petition to Gap Inc. to demand the 16 fired workers are reinstated.