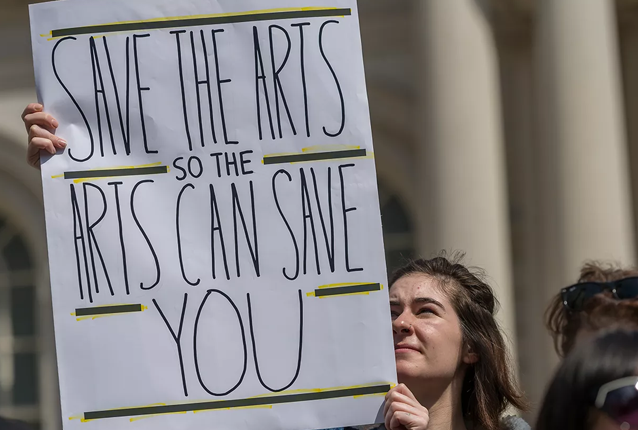 UPDATE (7/13/17): Yesterday afternoon, the U.S. House of Representatives Appropriations Subcommittee on Labor, Health, and Human Services, Education, and Related Agencies approved funding for the National Endowment of the Arts (NEA), National Endowment for the Humanities (NEH), and Corporation for Public Broadcasting (CPB), at levels that enable the three organizations to remain operational. The FY2018 appropriations are significantly higher than what the administration initially proposed (less a $5 million budget cut for the NEA & NEH). The subcommittees’ actions show continued support for the arts and humanities, and interest in protecting our nation’s investment in family-sustaining arts jobs.

Arts and humanities programs educate, enrich and shape our lives and communities. But these programs seem to have no place in Donald Trump’s America. His draft fiscal year 2018 budget calls to eliminate funding for the Corporation for Public Broadcasting (CPB), the National Endowment for the Arts (NEA) and the National Endowment for the Humanities (NEH), which would go into effect this October.

The NEA’s mission “is to make sure all Americans have access to the arts no matter where they live.” While budget cuts may not have a devastating impact on cultural hubs like New York, Los Angeles, and Washington, DC, underserved urban and rural communities absolutely will. Forty percent of NEA-supported activities take place in high-poverty neighborhoods, and more than half of NEA-funded art events occur in places where the median household income is less than $50,000.

Thirty-six percent of NEA grants fund organizations that reach populations of people with disabilities, people in institutions, and veterans. Federal agencies, like the Department of Defense, partner with the NEA to use the arts as a platform for enhancing quality of life. For example, the NEA Military Healing Arts Partnership supports creative art therapy programs to assist injured or ill service members and their families on their road to recovery.

NEH grants led to the creation of books, films, museum exhibits, and other exciting discoveries, over the past 50 years. Humanities programs play a key role in supporting and engaging urban, at-risk youth across the country. PRIME TIME, created by the Louisiana Endowment for the Humanities, is one such program. It was designed to build literacy skills and encourage family bonding through storytelling, using “award-winning children’s books that include culturally diverse stories.” A commissioned impact study revealed students who participated in PRIME TIME from grades 1-4 scored higher on Louisiana state exams. Parents also reported that PRIME TIME gave them the opportunity to bond with their child, made them more comfortable going to the library, and caused their child to want to read more books.

The NEH also invests in significant social, cultural and public health research ventures that could disappear if Congress approves Trump’s budget plans. The agency backed grants to Indiana University for projects as diverse as tracking the spread of HIV/AIDS throughout society to the preservation of heritage materials from Native Americans, and indigenous groups across the world.

The CPB is the largest single source of financing for public media, providing operational support for and universal access to public television and radio stations, and related online and mobile services. A loss of federal funds means that the CPB would have to raise 200 percent more in private donations to stay afloat. Americans would pay a high price – not only by way of donations, but by “losing enriching, thought-provoking content that broadens people’s horizons.”

Lidia Bastianich is one of public broadcasting’s many stars of who bring powerful stories and content to American households. Now a renowned chef, Bastianich escaped Yugoslavia as a child refugee and also lived in a Nazi concentration camp in Italy. She has a special interest in honoring American troops who “fight for the freedoms she never takes for granted.” Thanks to CPB funding, she hosted “Holiday for Heroes,” broadcast to millions on PBS, where she met and cooked with veterans who shared tales of their service, and how food factored into their recovery.

In a letter to President Trump, a bipartisan group of senators expressed interest in continued support of the NEA, NEH and CPB, arguing that their ‘shoestring budgets’ are worth the return on investment. The arts and culture sector is a $704 billion industry, accounting for 4.2 percent of the Gross Domestic Product (GDP). The combined budgets of the agencies equal $741 million per year – less than one-tenth of one percent of the annual federal budget. Gutting these programs would prove costly to the livelihoods of all Americans.

Alongside the potential loss of cultural content is the loss of employment. Trump campaigned on a job creation platform but is all set to slash funding to these three organizations. The agencies directly and indirectly support millions of jobs in all states and congressional districts, many of which are family-sustaining jobs. The NEA, NEH & CPB provide career development and advancement opportunities for people who aren’t living in large cities, or who may not have the money to get started in the arts. Actors Equity Association Executive Director Mary McColl summed it up: “The President says he wants to create jobs—he can start by protecting our nation’s investment in middle-class arts jobs.”

While eliminating arts and humanities funding and ultimately, American jobs, the Trump administration instead is seeking billions of dollars for other appropriations. His draft budget – titled “A Blueprint to Make America Great Again” – puts priorities in the wrong place, pivoting from the organizations that add to the multi-layered fabric of our country to a spirit of American exclusivity. As the Performing Arts Alliance maintains, the arts have the “power to transport audiences, unite communities, promote empathy and understanding, and humanize differences.” In other words, the NEA, NEH, and CPB are a large part of what makes America already great.

Take action: call your congressional representative and urge them to reject any budget that eliminates funding for the arts, humanities and public broadcasting.