Supreme Court’s Attack on Working People: Reproductive Justice and So Much More

Today, the Supreme Court, for the first time in history, took away a bedrock constitutional right, overturning Roe v. Wade and letting states institute complete bans on abortion. Jobs With Justice stands with working women around the country in condemning this decision and calling on government leaders, corporate CEOs, and working people to do everything in their power to protect women’s rights to control their bodies and access necessary health care, including the ability to terminate a pregnancy.

The Supreme Court’s abortion decision is far from its only attack on working people’s health. Just this week, the Court has condemned working people to live in a more unhealthy environment in two distinct ways. First, the Court took away the federal government’s power to combat climate change under the Clean Air Act. The Court left our neighborhoods and communities less safe by taking away states’ and cities’ power to limit people’s ability to carry guns in public. These decisions reverse prior court decisions in a way that protects the powerful and harms working people with the least power.

Why has the Supreme Court made such a series of decisions, and why are working people the target of these decisions? It’s not just that the composition of the Court has changed. In fact, the Court has fewer Republican appointees than it had in the early 1990s when it last upheld Roe v. Wade in the Casey v. Planned Parenthood decision. It takes something more than just the appointment of conservative judges to come up with results such as this.

These decisions are a culmination of decades of attacks on the rights of working people through lawsuits funded by billionaire CEOs and decided by judges funded by the very same CEOs that broke our democracy to a point that the justices believed they could get away with decisions such as these.

These decisions could not have happened without prior cases. From Citizens United, which decided that corporations were people with a constitutional right to buy elections, to Shelby County, which declared the heart of the Voting Rights Act of 1965 unconstitutional and allowed states to suppress the votes of working people of color. Or Janus, which struck at the power teachers and other public sector workers had gained through their unions, and other cases, which attempt to disempower working people and thereby allow the Court to make such extremist decisions without any accountability from the people.

This is not the end of the fight, however. It is the beginning of a new chapter. Courageous BIPOC-led groups such as All* Above All as well as members of the Jobs With Justice network are leading the fight for an inclusive view of reproductive justice that will put the right to healthcare and to have or not have a healthy safe family on a more solid working people-focused footing.

We stand with and support working people who will not stand by for these attacks on them by the Supreme Court. 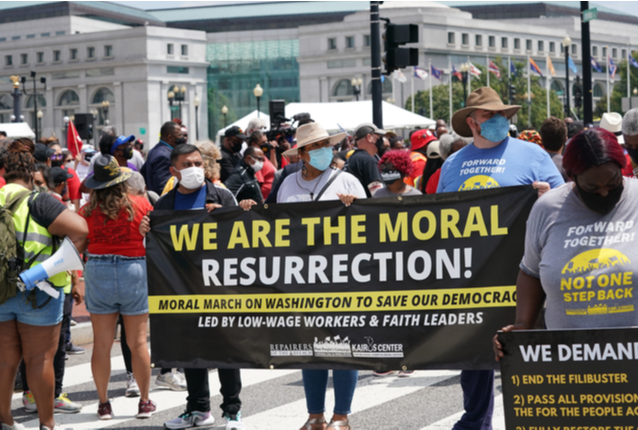