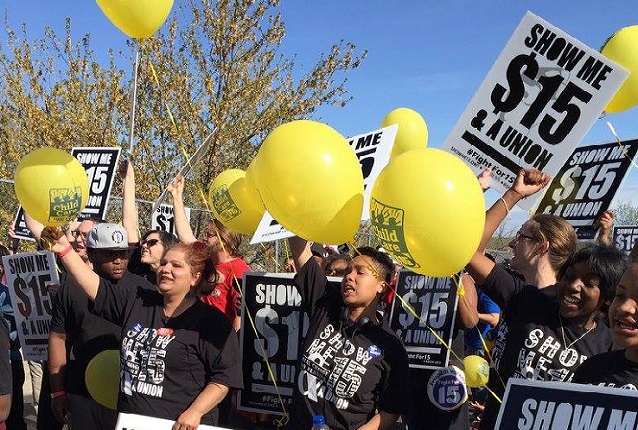 Working people, city officials, and supporters of a higher minimum wage in St. Louis recently won a major victory after the Missouri Supreme Court ruled the city could in fact raise the minimum wage to $10 an hour immediately and $11 an hour in 2018. Big business organizations ultimately lost their lengthy battle to force the city to maintain the state’s paltry $7.65 minimum wage. However, obstacles remain as opponents seek new ways to block progress in St. Louis, Kansas City, and throughout Missouri.

Back in 2015, working people, and a strong coalition led by Missouri Jobs With Justice joined with the city of St. Louis and passed an ordinance raising the city’s minimum wage. The raise from $7.65 to $11 by 2018 was hailed as a mile marker for the Midwest, where wages lag behind other coastal areas of the country. Soon after the bill passing, corporate industry leaders blocked the victory laps.

While advocates laid the groundwork for ushering in a strong wage increase in St. Louis, opponents schemed to protect their profits and the status quo. And so on a parallel front, Republican legislators in Missouri pulled no punches by utilizing a cynical tactic known as preemption.

Conservative-dominated state legislatures spent the last several years passing preemption laws, which the National League of Cities defines as “the use of state law to nullify a municipal ordinance or authority.” In other words, if a city wants to lift up working people and give them a raise, lawmakers at the state level can use a preemption law to negate any action taken at the local level.

Missouri’s preemption campaign specifically went after two targets: 1) local efforts to ban or limit the use of plastic bags and 2) local efforts to improve employee benefits, including raising wages, sick days, and paid leave. Within weeks of St. Louis upping the city minimum wage, legislators in Missouri moved quickly to pass the preemption bill. Due to the outcry, then-Governor Jay Nixon vetoed the bill, but the Republican dominated state legislature overrode Nixon’s veto, securing preemption into law. After the preemption law was put into place, business organizations sued to stop the wage increase, arguing it violated state preemption laws.

Even in the face all the maneuvering of well-funded lobbyists and lawyers fighting them every step of the way, how did working people achieve a more family-sustaining wage in St. Louis? Missouri Jobs With Justice Voter Action held a strong coalition of labor, student, and religious groups together to raise the city’s minimum wage and advance a progress agenda. They refused to back down quietly while corporate CEOs rigged the rules to preventing Missouri families from getting ahead.

The impact on working people cannot be overstated. “Every week my family struggles to make ends meet. I am thrilled I am finally going to see a fairer return on my hard work,” said Betty Douglas who has worked at McDonald’s for several years and is a leader in the national Fight for $15.  She continued, “This puts a smile on our faces, and right after our Andy Puzder victory, where he withdrew as Labor Secretary nominee.”

Despite the Missouri Supreme Court ruling, business interests launched another legislative obstacle to prevent Missourians from earning a decent living. Republican Missouri State Representative Dan Shaul just filed a bill to roll back the St. Louis increase and pre-empt an effort to raise wages in Kansas City. Shaul effectively operates as an elected lobbyist, as he also serves as the executive director of the Missouri Grocers Association, which represents the state’s grocery industry. It should come as no surprise that Shaul was also the lead sponsor of the first preemption law meant to kill local communities from adopting plastic bag and employment reforms.

Missouri Jobs With Justice’s Policy Director, Richard von Glahn hammered Shaul’s latest attempt to steal money from working people, telling the Missouri Times, “It is shameful members of the Missouri Legislature are prioritizing and fast-tracking legislation that would take money out of the checks of people who are excited to finally make $10 an hour.”

Even with new preemption efforts circling the capitol in Jefferson City, Missouri Jobs With Justice and its incredible coalition remains undeterred from their larger goal: a statewide minimum wage increase. “This was always meant to be a first step in raising the wage for all workers in Missouri,” said Rasheen Aldridge, who serves on the leadership team of Missouri Jobs With Justice whose activism began while working at a Jimmy John’s. “I’m getting my clipboard ready to put this on the ballot for all the workers in Missouri.”

Local control advocates still have to reckon with business forces using loopholes like preemption to hijack democracy. To turn the tables, an emerging coalition working with Missouri Jobs With Justice intends to reclaim the democratic process from special interest lobbyists and hybrid elected lobbyists like Rep. Shaul with an initiative petition for the 2018 ballot to restore balance, fairness, and accountability to voters. Missouri advocates and working people have a resounding message to opponents of progress: We will organize, we will fight, and ultimately, we will win.