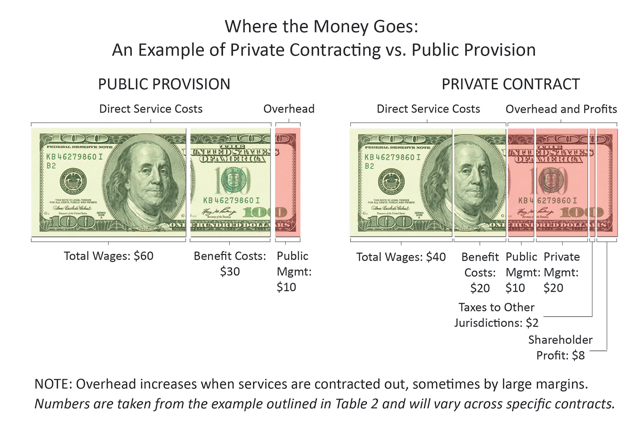 The call for outsourcing or contracting out of government services is often made through an appeal of cost savings to taxpayers. Since the Great Recession, state and local governments facing budget challenges are increasingly shifting the delivery of public services – from school bus drivers to accountants and trash haulers – to outside firms to save money. Yet the full extent of the social and economic consequences facing communities whose governments decide to outsource public services has not been examined.

Thankfully a new report released today, “The Decision to Contract Out: Understanding the Full Economic and Social Impacts,” shines a new light on these real costs. The study argues that governments should pursue broader analysis of contracting out, much like how cities and states have been requiring environmental impact studies ahead of major policymaking and financial decisions.

Report author, Daphne T. Greenwood, professor, Department of Economics, University of Colorado, explains that “there is a wealth of evidence that outsourcing public jobs often diminishes quality without substantial cost reduction.” But broader social and economic effects “are often forgotten when considering the cost effectiveness of a contract. Since local and state governments are major employers in many communities, their decisions about how to deliver services are important to economic development.”

The study, released by the Colorado Center for Policy Studies based at the University of Colorado, Colorado Springs, and funded by Jobs With Justice Education Fund, found government outsourcing can lead to a host of negative consequences, including:

To help leaders assess the full impacts of outsourcing decisions on their own communities, the report includes a guide for calculating the social and economic consequences to a state or community. Examples of statutes that address broader economic and social issues are also included.

Amalgamated Transit Union (ATU) reported to us that Dallas Area Rapid Transit (DART)’s outsourcing of its paratransit service to MV Transportation illustrates the findings in Greenwood’s report. Since then, the agency has faced months of criticism about how MV provides rides for elderly passengers and people with disabilities. DART had to recently raise fares to cover costs and subsidize 40 percent of its service to taxi cabs. Many riders have expressed displeasure with the taxi service because of poor treatment by the taxi drivers.

“Since MV took over paratransit service, savings come before quality of service. To cut costs, drivers have been forced to work longer hours and many are fatigued behind the wheel, threatening the safety of the elderly and people with disabilities, who rely on us to get them safely to the doctor, church or grocery store,” said Charlene West, veteran paratransit driver. “These crazy hours have also caused health issues for many drivers, but we can’t get to the doctor because we can’t get time off during the day. In addition, MV has cut costs with poor vehicle maintenance which also compromises the safety for drivers and our passengers.”