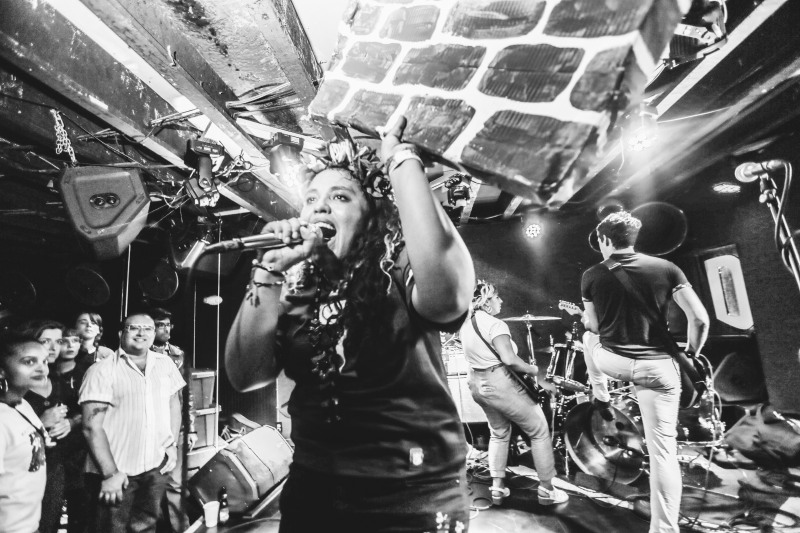 “It’s all on us. It’s all on us because it takes all of our voices to influence change.”
-Martin Rucker, former NFLPA member, LiUNA member, community organizer and co-founder of Northland Progress.

This past weekend, Jobs With Justice hosted its first Workers Revival Festival in Kansas City, with the goal of engaging people from different backgrounds, and building relationships with those working outside of institutional labor groups. Hundreds of individuals, including construction workers, warehouse assemblers, retail clerks, writers, janitors, and even a former NFL player, came together to share their experiences, celebrate workplace rights, and explore ways to build power for working people.

Unlike many other music festivals, the Workers Revival Fest fused music with a message; entertainment with experiential learning. On Friday night, the Festival opened with the local hip-hop collective NUBLCKCITY, followed by Ebony Tusks, Friendship Commanders, Red Kate, and Downtown Boys. During the Downtown Boys’ final set, the entire crowd was in motion, and lead singer Victoria Ruiz punctuated the space between songs with ideas on ways to fix the rigged system and help working people.

Martin Rucker, retired NFL Players Association and LiUNA 663 member, spoke from the stage in support of unions and on the importance of organizing in the workplace. He recounted how the players’ union stood up to greedy bosses in the NFL, and how he was able to find a good unionized construction job after retiring from pro football at age 27. Martin shared how his experiences encouraged him to take action when he saw legislative attacks on working families in Missouri. “It takes all of us. We don’t get the change that we want and we don’t get the change that we deserve without coming together!”

On Saturday, attendees had the opportunity to turn art into action. The Center for Story-based Strategy led a workshop on unpacking the power of storytelling. Participants gained first-hand practice in learning how to look for stories everywhere, from in the material of their clothing, to the layout of their cities. Local organizer Diana Martinez shared the story of a community member who was detained while paying a traffic ticket, and what happened to his family since then.

“His wife is now left alone trying to raise two little girls, provide for them, feed them, and keep a roof over their heads – but it has been hard.” After some practice with Jobs With Justice, Diana imparted the story with the larger crowd, sharing how the myth of the American Dream came crashing down for this family living and working in Kansas City. She then called on the entire community to put their money on the line and support this household.

During the Organizing 101 workshop, a local hotel employee shared a story of working in terrible conditions and for low wages. Fellow workshop participants and festival musicians, Downtown Boys, provided sympathy and advice from their experience fighting to organize the hotel where they met and worked years before.

Throughout the weekend, other local community members, activists and others took to the stage with bands to tell their stories of coming together to make change for their communities.

Alex Martinez, a poet and community organizer, performed a poem about loss, resilience and organizing, as an undocumented immigrant. “If I could tell you anything I would tell you about the day my mother left. I was left in a house at the intersections of survival and loneliness. I waited for her but she never came back.” Before sharing his moving poem, Martinez informed the crowd […] “I am not sharing my stories so you feel bad for me. I am sharing this so you take action.”

Anderson Rasmussen, a community activist, and Missouri Jobs With Justice organizer, discussed his path from being enraged, to becoming a strategic interventionist. He relayed stories of working with Occupy Kansas City, and collecting signatures to raise the minimum wage in Missouri. He said: “I was incredibly excited to hear about the festival that is happening this weekend, not just because some of my very favorite bands are playing, but because of the messages that they are bringing. All of the bands tonight and tomorrow are talking about the idea of revolution and the ideas of changing the world, and that is incredibly important to me.”

The Festival came to a close on Saturday night, with a vibrant performance by local feminist band Lovergurl, followed by Scruffy and the Janitors, Austin Lucas, and Rev Sekou, who got the club bouncing into traditional revival territory with their uplifting lyrics for liberation. The Festival closed with Baracutanga, a seven-piece band from Albuquerque, New Mexico. Baracutanga incorporated a local drum core from Kansas City’s Latin Jazz All-Stars into their unique performance of traditional South American melodies, reimagined with influences from all over the globe.

The weekend of art-meets-action was a success. People from different backgrounds had the opportunity to brainstorm ideas on making their workplaces better, while those without organizing experience were able to learn from others who fought for and won improvements in their workplaces. To cap off the spirit of the weekend, local artists created a collaborative banner that was hung up in front of the festival venue. It depicted voices raising up slogans from current struggles affecting working people, underscoring the issues we face, along with a powerful symbol of the solidarity we need.