Keeping the Nation’s Promise to Miners 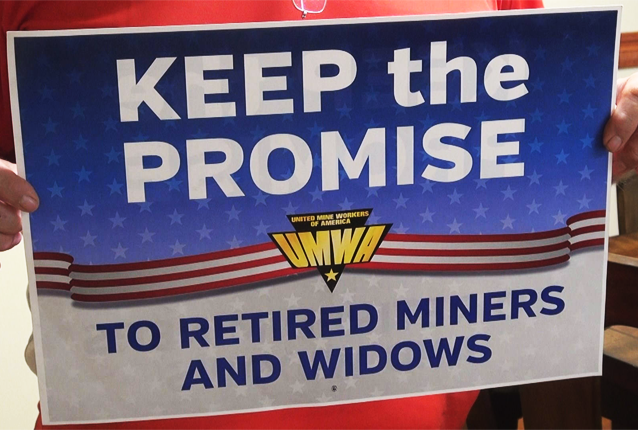 UPDATE: A key part of the Miners Protection Act finally passed in May, thanks to the diligent advocacy of the working people of the United Mine Workers of America (UMWA) and their supporters. Congress restored funding of future healthcare benefits for more than 22,000 retired coal miners, their dependents, and widows. UMWA’s efforts to preserve the pensions and retirement security for miners continues.

Mine workers rarely make headlines these days.  While the likes of John L. Lewis and Phillip Murray take up prominent space in U.S. folklore and labor history, many are quite comfortable with them and the stories of those miners staying firmly in the past. With the exception of a tragedy, such as the deadly collapse of an unsafe mine, often unseen are the modern innovations and creativity of miners and their union to ensure that those who powered this country for the past century are well taken care of in their twilight years. Unseen, that is, until earlier this month when 10,000 retired coal diggers, rail operators and other people who worked in America’s mines took to the streets in Washington, D.C., to demand Congress uphold a promise they made over 70 years ago.  And that’s where our story begins.

To overcome dependence on unreliable company doctors at the turn of the 20th century, the United Mine Workers of America (UMWA) developed and operated at least a dozen healthcare centers and hospitals to improve services and accountability to their members. Through these hospitals members were democratically involved in their care, hiring doctors and ensuring timely attention and care to miners and their families.  But it was not enough, and the union continued to challenge the coal industry to provide safer working conditions and adequate resources for care for miners injured on the job.  At the end of World War II, the UMWA and many other industrial unions of working people organized strikes for better pay, health benefits and safety—officially breaking the no-strike pledge of the war.

To end the strike, the Truman Administration negotiated the Krug-Lewis Agreement with UMWA, which stipulated that the U.S. government would provide retirement security for coal miners and their families—including cradle to the grave health care.  The agreement created a welfare and retirement fund and a separate medical and hospital fund—later combined to form the UMWA Health and Retirement Funds—that were guaranteed by the government.

Coal miners were promised lifetime retirement benefits by U.S. President Harry Truman in return for their decades of backbreaking, dangerous work to power our communities. That promise has been kept up to now.

Seventy years later, a small handful of powerful people in Congress are orchestrating a great betrayal against miners. With the majority of the coal industry in bankruptcy, many coal corporations have stopped funding healthcare benefits and pension funds. As a result of financial mismanagement of the mine companies, the health and retirement fund is shrinking, and many retired miners are on the edge of losing everything they have worked so hard for. Instead of standing up for mine workers, Senate Majority Leader Mitch McConnell of Kentucky has led the charge to block the allocation of funding for mine worker health care.

If representatives don’t move quickly on the Miners Protection Act, more than 22,000 retired miners or widows of miners will lose their healthcare benefits early next year. The miners of UMWA have rallied elected officials and community members to not let that happen.

On September 8, more than 10,000 mine workers and retirees descended on Washington, D.C., to demand Congress hold up its end of the deal to provide lifesaving healthcare coverage. Supporters of the miners, like Jobs With Justice, joined them to support the bipartisan group of senators trying to enact rules to ensure miners can count on continued healthcare and retirement coverage.

The Miners Protection Act is expected to pass out of the Senate Finance Committee on September 21, after which, it is up to Majority Leader McConnell to take it to a floor vote.  Retired mine workers are calling on McConnell to do just that, and uphold the promise the government made to them.