We Stopped Andrew Puzder from Becoming the Next Labor Secretary 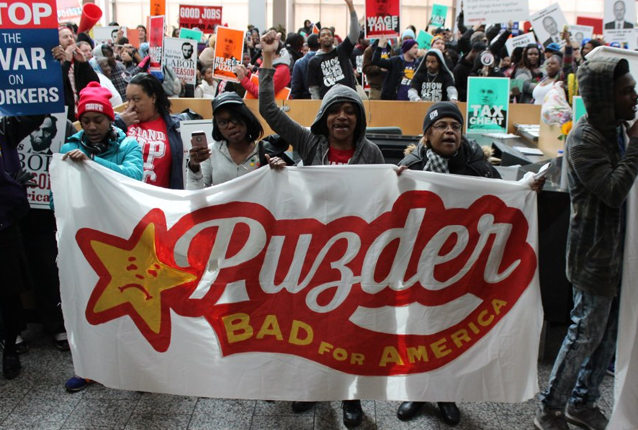 Since President Trump announced Andrew Puzder as his pick for Labor Secretary in December, people stood up and firmly declared their opposition to the fast-food CEO. His record on hurting working people, demeaning women, and lining his own pockets was in direct contradiction to what we need from the Department of Labor. Yesterday, working people declared victory as Andrew Puzder withdrew as the Labor Secretary nominee. As a result, thousands  took to social media to celebrate this incredible triumph beating back the #AntiLaborSecretary. Puzder’s withdrawal was proof that when we come together, our actions and words speak volumes.

Here’s just a sample of the reaction to yesterday’s news.

BREAKING: When working people come together, anything is possible. Goodbye #AntiLaborSecretary Puzder. https://t.co/bBjfYPEPTF

When he blocked us on Twitter, it was all down hill from there. #AntiLaborSecretary pic.twitter.com/eIVMJLMnhk

The withdrawal of @AndyPuzder for consideration as Labor sec. is a victory for working families & shows the power of grassroots resistance ✊

There was an enormous amount of mobilization against Puzder on the left. Big victory for organizers.

Never forget who made this important victory possible – all of you. #Puzder https://t.co/XWuT2T48Gb

The defeat of Puzder was only possible because of broad mobilization across interests and industries. Organizing works. #FightFor15 pic.twitter.com/xACJFE7eHD

Andy Puzder’s nomination was an insult to working families across America. Make no mistake: the #resistance won this fight.

Workers and families across the country spoke up loud and clear that they want a true champion for all workers in the Labor Department.

I'm glad Puzder will withdraw. Given his relationship to his employees he wasn't fit to lead a department responsible for defending workers. https://t.co/keclfhuktH

Collective action leads to the rejection of #AntiLaborSecretary @andypuzder's nomination as head of the Labor Dept. https://t.co/1Dqd08SfyM