Jobs With Justice Leader Arrested as Escalations Heat Up on Immigration 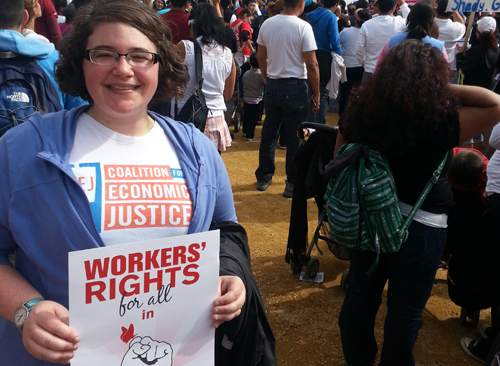 Jenn D’Agostino from Coalition for Economic Justice in Buffalo, N.Y., was arrested as part massive nonviolent direct action at the base of the Capitol.

October is heating up with local and national escalations demanding change to our broken immigration system.  Our push for immigration reform is urgent as the deportation crisis continues to hurt workers and their families Every day Congress stalls on immigration reform, cases of worker abuse are piling up and workers are being deported for blowing the whistle on bad employers.

Today, our network leaders from Rhode Island, East Tennessee, and Buffalo joined tens of thousands of people at the nation’s capital to demand the House take action for immigration reform.  And, just moments ago Jenn D’Agostino from Coalition for Economic Justice in Buffalo, N.Y., was arrested as part massive nonviolent direct action at the base of the Capitol at the climax of today’s events.

“I came to DC to urge Congress to take action and fix our broken immigration system, and to make sure that fix includes worker protections. Immigrant workers are some of the most vulnerable, and they work in the shadows of our economy. In Buffalo, we have the highest number of refugees per capita than any other city in New York State, coming from countries like Burma, Somalia, Vietnam, Iraq, and these new workers are frequently placed in low-income industries. When we protect immigrant workers from retaliation and exploitation and hold bad employers accountable, we raise the floor for all workers.”

Already, Jobs with Justice has been in the streets, in the halls of Congress demanding that the House pass comprehensive immigration reform legislation that includes strong worker protections.  Our network members have also been outspoken in encouraging the administration to stop its policy of deportations.

Just this past weekend, 15 local Jobs with Justice coalitions participated in mobilizations as part of the National Day for Dignity and Respect that took place in more than 160 cities. And also this weekend, California celebrated a huge victory when Governor Jerry Browned signed the TRUST Act to stop the deportation program “Secure Communities” in the state that has been used as a weapon against workers.

Starting tomorrow workers from around the country who have suffered workplace abuse under the current immigration system will be in Washington, D.C., to share their stories and demand Congress act.  Next week Jobs with Justice leaders from Massachusetts will join the #NotOneMoreDeportation campaign in Phoenix for an action to shut down ICE for a day.

Stay tuned for more updates in October as workers across the country will be speaking out at events to continue raising the need for workers’ rights for all in immigration reform, and to put an end to the deportation of workers and their families.

Tags: Not One More