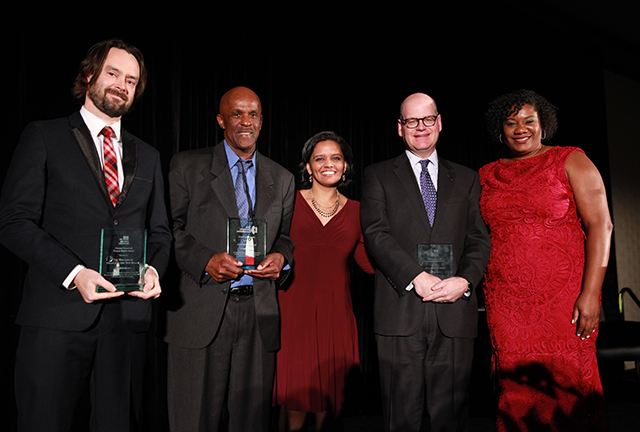 Eleanor Roosevelt had a long and impressive history of supporting men and women on picket lines. She was instrumental in including the right to organize in the UN Declaration on Human Rights. She also serves as the namesake and inspiration for the Jobs With Justice Education Fund Eleanor Roosevelt Human Rights Awards.

At our 12th annual Awards Celebration last week, we toasted individuals and organizations who are making a difference in their workplaces, in their communities and even on-screen. Whether motivating others to rally against injustice, leveraging their talent to speak truth to power, or using their power to advocate for what’s right, Alfred Marshall of STAND with Dignity, the writers of Orange Is The New Black and Amalgamated Bank are all change agents for working people.

At the event, Alfred Marshall was honored with the first-ever Discount Foundation Legacy Award. As an organizer in New Orleans, Alfred works to win back power for structurally unemployed and underemployed Black men and women through campaigns to achieve higher wages and better standards in his community. Through Alfred’s tremendous organizing campaigns, he has helped win local hiring on post-Katrina public construction and development projects, a “Ban the Box” rule, and a living wage and paid sick leave ordinance for individuals employed under city contracts.

“By sitting down and talking with other workers at the New Orleans Worker Center, I realized that we’re in this together,” Alfred said. “New Orleans won’t stop. I won’t stop. This award is bigger than I am. It’s all about doing the work on the ground. We’re shaking this world up.”

As the recipient of the Discount Foundation Legacy Award, Alfred will receive a $20,000 stipend to advance and nurture his work in New Orleans.

It’s not common to see a major television show tackle organizing and workplace injustice with grace, with authenticity and with humor.  Which is why the writers of the critically acclaimed series Orange Is The New Black were honored this year with the Eleanor Roosevelt Human Rights Award for their honest depiction of the harm caused by prison privatization and why working people organize to improve their jobs.

SAG and NAACP Image Award–winning actor Adrienne C. Moore, who plays “Black Cindy” Hayes on Orange Is The New Black, presented the award. An outspoken advocate with the Make It Work campaign, Adrienne took time away from her busy filming schedule to elevate the work of her show’s writers. And in doing so, she got to know the Jobs With Justice community more deeply.

“In the past day and a half that I’ve spent with you all here, and hearing about the work you do, I’m moved to be in your company. The advocacy you provide should be celebrated,” Adrienne said. “It’s 2016 and people who work hard deserve more than a decent living. They deserve a decent life.”

Orange Is The New Black writer and producer Nick Jones, who accepted the award on behalf of the series’ writers, shared with the audience that writing the show’s script gave him the opportunity to delve into the issues affecting inmates and prison staff alike.

“Being in a writers’ room is basically talking about issues. If the forces of injustice are invisible, we can put a face on an issue through our characters,” he said. “We, as makers of a TV show about prison, deserve far less credit than the activists and policymakers who have been fighting for reform for years, and the reporters who bring true stories to light, many of which we draw from in our episodes. But to think that we have helped move the needle even slightly in the direction of change, in the direction of compassion, in the direction of justice, is deeply gratifying.”

The final honoree of the evening was Amalgamated Bank.

Amalgamated has not only served as the go-to financial institution for working people and organizations committed to social and economic justice, they have championed the idea that all working families – not just the wealthy and well-connected – deserve accessible, affordable banking.

And when Amalgamated became the first bank in the nation to boost its starting wage for tellers to $15 an hour, the bank’s President and CEO Keith Mestrich challenged other banks to do the same.

In accepting the award for Amalgamated, Keith surmised that the injustices rife in the financial industry today would have drawn the ire of Eleanor Roosevelt herself.

“In an industry full of examples of multimillion-dollar bonuses, Eleanor would have been more than mildly unhappy that nearly half of the bank tellers in New York State are on some form of public assistance,” Keith said. “But at Amalgamated, we said ‘no’ to all of this. We raised our minimum wage to $15 an hour, indexed it to go up every year, and challenged the rest of the industry to do the same. And I think that would have made Eleanor proud.”

Jobs With Justice Education Fund would like to acknowledge the generosity of our event sponsors and everyone who helped to make the 12th Annual Eleanor Roosevelt Human Rights Awards Celebration a success.

Take a look at our sponsors who made this evening possible and please look at our photo album below. 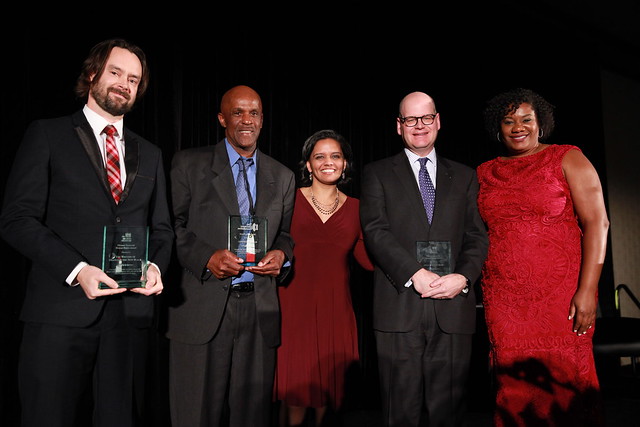