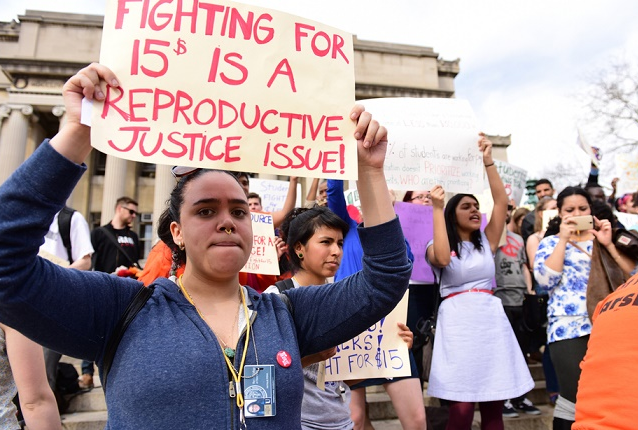 Photo via Rewire and a katz / Shutterstock.com

A doctor decided that Loretta Ross shouldn’t have any more children. He sterilized her without her permission when she was 23. A woman working at Burger King wanted to see a doctor because she was bleeding profusely. Her manager pressured her to stay at work or risk losing her job. She later discovered she was having a miscarriage.

At a recent talk about the interplay between economic and reproductive justice hosted by Center for American Progress, advocates shared these stories in discussing the significance of women asserting control of their reproductive health.

Black women came together in 1994 to launch the reproductive justice movement to ensure women gained autonomy over their bodies. Since its founding, the movement has empowered women across incomes, borders, race, and ethnicities to organize for better maternal health, OB/GYN care, birth control, STI treatment, abortion rights, and sex education.

Today’s movement activists are engaging in epic battles to protect and advance health care for women, their children and all who follow. And they’re not doing it alone.

Reproductive justice advocates recognize that economic and social factors play a large part in reproductive health care. For instance, access to affordable housing, public transportation, sustainable employment, and quality education impact a woman’s choice about whether or not to become a parent. Women’s health and wellness are determined by a range of systemic conditions that may extend far beyond the traditional agendas of reproductive health groups.

That’s why intersectional organizing is so important. As Loretta J. Ross, co-founder and national coordinator of the SisterSong Women of Color Reproductive Justice Collective said, it “invites us to think about all the issues.” Building relationships with, and engaging stakeholders throughout the reproductive, social, and economic justice fields also results in wins.

For instance, a cross-movement effort derailed Andrew Puzder, Trump’s first pick for Labor Secretary. He opposed policies that would raise women’s pay and close the gender wage gap, and attacked women’s health care, making it harder – and even illegal – for women to get the reproductive health care they need. Thanks to the work of a wide range of groups, including organizations like All* Above All, that put sweat equity into intersectional organizing, we prevented Mr. Puzder from taking office.

Intersectional organizing also helped defeat the American Health Care Act (ACHA). Preserving the Affordable Care Act was a major coup to protect women’s health and economic freedom. The ACHA would have forbidden women from using tax credits to purchase abortion-providing insurance coverage, and would have required them to purchase a separate plan for that purpose. House Republicans would have rolled back Medicaid coverage and subsidies, threatening the health and economic security of 3.9 million women, including 2.3 million working women who recently gained Medicaid coverage. Angela Ferrell-Zabala, director of strategic partnerships at Planned Parenthood, underscored the threat: “Many women who come to Planned Parenthood are on Medicaid. When you tamper with Medicaid, it impacts the community – primarily Latinx and Black women.”

Now reproductive justice fighters are in the trenches with consumer advocates, democracy organizations, economic justice allies and many more to stop Neil Gorsuch, Trump’s nominee for the U.S. Supreme Court. The judge, whose confirmation vote is scheduled for this week, has a track record of siding with big corporations and against the interests of working women and men. When Hobby Lobby sued to avoid having to cover birth control for their employees, Gorsuch ruled in the retailer’s favor. This decision, allowing corporations to restrict insurance coverage of basic family planning care, made Gorsuch a target for a cross-section of progressive organizations. Reproductive justice activists also oppose Gorsuch for his rulings and campaigning to defund Planned Parenthood.

Intersectional organizing is vital in ensuring women have a full say about their bodies, their health, their workplaces, and their communities. Using the last 100 days as a yardstick, the Trump administration does not seem to have women’s health issues at heart. Thankfully, the past three months demonstrate the power of mobilizing various movements and amplifying a bold array of voices to action.