In Less Than a Year, D.C.’s First Walmart Is Already Threatening Local Businesses 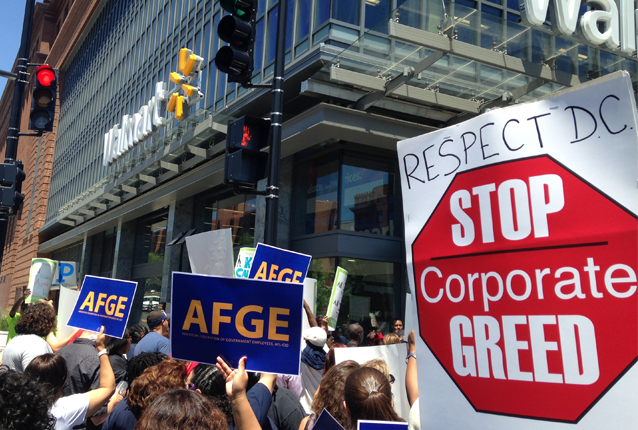 Respect DC held a rally with Walmart workers outside one store in the District earlier this year.

Less than one year after its opening, small business owners within the immediate vicinity of a new Walmart Supercenter in the nation’s capital say their establishments are already in danger of closing, according to a new report released by Respect DC and Ward 4 Thrives.

The report cites several local business owners who claim the District has granted preferential treatment to the giant retailer by removing parking spaces in front of their stores and relocating a bus stop to directly in front of the Walmart.

One owner claimed her local medical supply store has suffered an estimated 25 percent loss of revenue since parking changes were made to accommodate Walmart. Jose Chavez, owner of nearby Usulután Grocery, said his store has lost 85 percent of its revenue since the supercenter opened. “The day Walmart opened was the last day I had good sales here,” he said in a press release published with the report.

As Ari Schwartz, an organizer with DC Jobs With Justice and editor of the report, explained to DCist:

“When you’re shopping locally, that business owner is more often than a big box store banking locally, buying inventory locally, paying local taxes, sending their kids to a local school, all of which puts money back into communities. Walmart and giant corporate chains return their profits to their corporate headquarters and shareholders rather than D.C.”

The report authors led efforts last year to prevent Walmart from opening stores in Washington without first coming to a written community benefits agreement with the surrounding neighborhoods. When the company failed to do so, the coalition successfully passed the Large Retailer Accountability Act through the city council, which would have guaranteed a living wage to employees of corporate chains such as Walmart, but the bill was ultimately vetoed by Mayor Vincent Gray.

Local businesses aren’t the only ones suffering from Walmart’s incursion into the District. Because of the retailer’s low wages, many employees are forced to rely on taxpayer-funded government assistance, such as food stamps and Medicaid. A previous report published by Americans for Tax Fairness estimated the company’s 600 employees cost District taxpayers $2.6 million each year.

You can read the whole report on Respect DC’s website here.