Immigrant Activists Targeted By Trump Administration Are Not Backing Down 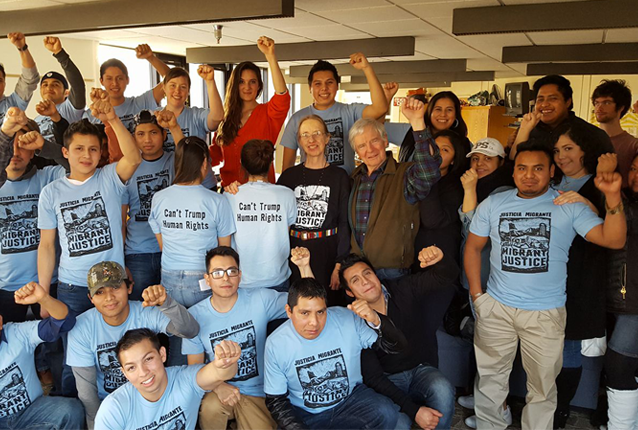 Zully Palacios and Enrique Balcazar are activists with Migrant Justice to improve the living and working conditions of farmworkers across the state. Enrique leads the #MilkWithDignity campaign, calling on Ben & Jerry’s to commit its dairy farm suppliers to providing dignified conditions for farmworkers. The two Vermont advocates also organize teach-ins, host community forums, and are vocal about creating better lives for their fellow neighbors.
By all accounts, Zully and Enrique are model community citizens and activists. Neither of them has a criminal record. But they were arrested last month.

Human rights, labor and immigration groups attested that officers targeted the pair due to their social activism. After local groups, including Jobs With Justice affiliates Vermont Workers’ Center and Massachusetts Jobs With Justice, mounted protests and a legal defense fund, a judge released Enrique and Zully last week.

This type of retaliation against community leaders, unfortunately, is not an isolated incident. Reports have surfaced within the last six weeks that immigration enforcement officials in Mississippi, Oregon, and New York have arrested active immigrant rights organizers and supporters Individuals who spoke out publicly or participated in community meetings. It appears that some immigration offices, perhaps emboldened by the Trump administration’s aggressive and overreaching policies, are pursuing those who criticize him.

The Trump administration’s actions are distressing to anyone who cares about our citizens and our abilities to exercise our rights and civil liberties. Dissent is a vital part of our democracy. The right to free speech is protected by The U.S. Constitution protects the right to free speech—and that right isn’t limited only to citizens or those with documentation. Hunting down people simply for being active in their communities betrays our values and rights to speak out in a democratic society.

Retaliation against immigrant activists follows the trend of Republicans pushing anti-protest bills in several states, which either floundered or were immediately shot down as unconstitutional. If the trend of local and federal authorities curbing protests continues, we can’t ignore the chilling effect.

Ellen Schwartz, president of the Vermont Workers’ Center, explained that Enrique’s arrest was “designed to sow fear within the immigrant community, pushing workers into the shadows where they are susceptible to exploitation and abuse. Left unchallenged, the perception of reprisal surrounding his arrest will create harmful ripple effects for undocumented workers, and indeed for all people exercising free speech rights in support of vulnerable groups, not only in Vermont but across the country.”

The damaging effect of Trump’s policies is not merely theoretical. News reports have surfaced revealing that immigrants who were once comfortable joining together and speaking up for better workplaces won’t come forward now due to the administration’s stance on immigration. Some say they are too afraid to collect back wages that are rightly due to them after the Department of Labor found their employers guilty of stealing their pay, for fear of being deported.

Like many of Trump’s plans, his immigration agenda benefits corporations that don’t want to ensure safe workplaces or pay fair wages. Punishing whistleblowers and community activists only will embolden disreputable employers, making it easier for them to exploit and mistreat the people who work for them, regardless of their status.

Immigrant and labor activists aren’t backing away from demands for sustainable jobs, healthy communities, and a brighter future for our children, despite retaliatory attempts to stop them. On May Day, more than 100 communities will march, protest, and strike against Trump’s attacks on working people and immigrants, to send a loud message of solidarity and resistance. Now that Zully and Enrique are free, they will continue their advocacy efforts with Migrant Justice, working to ensure Ben and Jerry’s follows through on its promise to farmworkers.