Fast Food Workers On the Move! 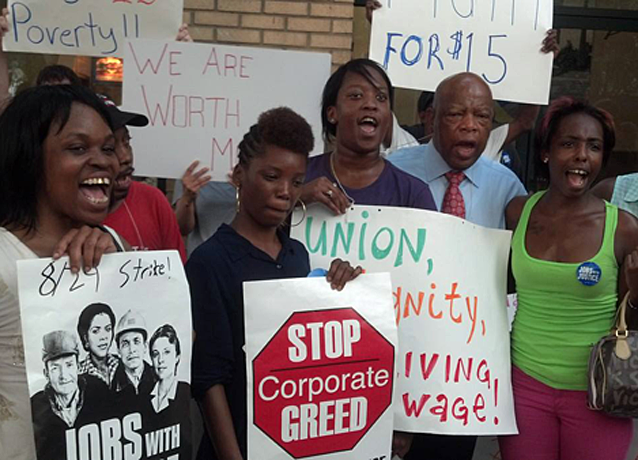 August 29, 2013 was truly a beautiful and historic day as fast food workers took the ‘march for freedom and jobs’ to fast food corporate employers in some 58 cities demanding respect and freedom from poverty wages. Specifically, the workers are demanding $15 per hour and the right to form a union. Men and women, tired of low-wages, paltry benefits, and disrespectful job conditions, took courageous action by walking off the job at 1,000 restaurants, and in the process, mobilized the largest nationwide fast-food strike ever.

Jobs With Justice was there across the country organizing and mobilizing community-wide support and helping to garner major attention from all forms of media. In Boston, Denver, New York City, Detroit, Kansas City, Indianapolis and other places, Jobs With Justice coalitions had the workers’ back.  In Atlanta, Congressman John Lewis joined a determined strike line, fresh from the 50th anniversary commemoration of the March on Washington for Jobs and Freedom. In St. Louis, Missouri Jobs with Justice stood in support of fast food workers who risked and took arrests while engaging in civil disobedience.

After the strike was over, community and faith leaders recruited and coordinated by Jobs with Justice coalitions accompanied workers as they returned to work for the first shift after their heroic action. This was a perfect fit for Jobs with Justice coalitions that have experience building and maintaining strategic, deep relationships with community, faith, academic and elected leaders.

As we celebrate Labor Day, Jobs with Justice prepares to take action this week across the country supporting Walmart workers who are also organizing and taking action to defend their dignity and economic security. One thing is for sure, low-wage workers are rising up! Jobs with Justice will ‘Be There’ the entire way!