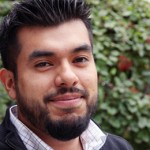 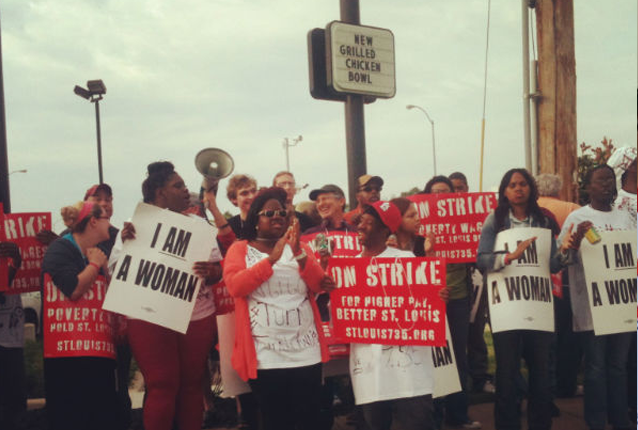 Via Missouri Jobs with Justice

St. Louis Jobs with Justice Student Co-Chair Rasheen Aldridge works at Jimmy John’s and has been a leader in the new St. Louis Can’t Survive on $7.35 campaign. He said:

Starting today, we’re standing up to huge corporations like Jimmy John’s, Subway, Panera, and more to make it stop. We’re demanding a living wage and the respect that we deserve, and we need to make sure that they – and all of St. Louis – get our message.

Most of us fast food workers here in town make $7.35 an hour – Missouri’s minimum wage – or just barely more. That means the average fast food salary here is less than $19,000 per year, and it just isn’t enough to cover our basic needs. With rent, food, health care, transportation, and often times a family to support, we’re struggling to get by. A lot of us are forced to rely on public assistance to make ends meet.

The day after the workers struck, clergy and community leaders walked the workers back to their job to ensure they won’t be retaliated against for their actions.

The St. Louis strikers join the ranks of other fast-food workers on strike in NYC, Chicago, Detroit, and low-wage workers at Wal-Mart stores across the country. As Josh Eidelson reports in Salon:

The top three job categories measured by the Bureau of Labor Statistics are all jobs done by fast food or retail workers, and the dominant conditions in these industries also increasingly typify work in America: low wages, unreliable scheduling, miserly benefits and no unions.

Labor’s future depends in significant part on whether workers at companies like McDonald’s and Wal-Mart can – like garment and auto workers before them – band together and wrest some power from their bosses.

The strikes are part of longer-term strategies aimed at bringing workers in some of the fastest growing industries together, and educating the public on the vast inequality that corporate giants are creating as they pay minimum wages while making record profits.

As the St. Louis Dispatch observed in an editorial:

But the strike here…should be seen not as an effort to bring an industry to the bargaining table immediately. It’s an effort to start a fire.

Nobody seriously thought the industry would bow to moral suasion and start paying a living wage…If McDonald’s did that, it might not have been able to triple its CEO’s pay package to $13.8 million last year.

In a way, this is what the fast-food strikes are really about: Drawing attention to the plight of the American worker in a time of record income inequality. It is a new front for organized labor and its new allies: religious organizations and social justice groups.

For Jobs with Justice, the strikes in St. Louis (as well as NYC, Chicago, Detroit, and by Wal-Mart workers) present an opportunity to engage in our core work: supporting working people standing up to corporate greed, and strategically mobilizing our base in powerful actions.

In St. Louis, the Worker’s Rights Board leveraged their power in support of the Can’t Survive on $7.35 campaign by delivering letters to managers at stores and walking striking workers back to the workplace after the strike. Jobs with Justice member organizations, leaders, and hundreds of activists supported workers at the 30 locations where workers went on strike.