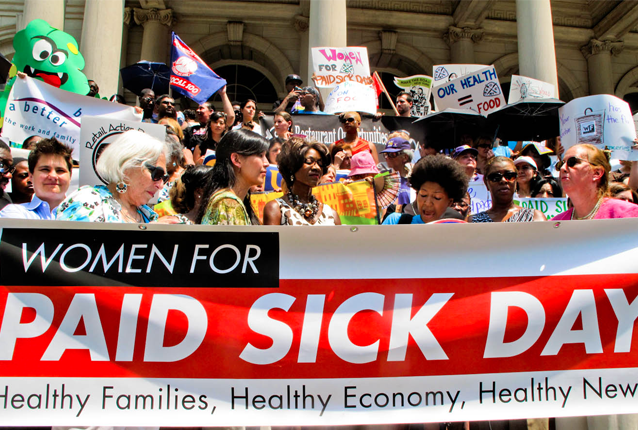 In a victory for working people, the U.S. Department of Labor (DOL) released regulations implementing President Obama’s executive order to require federal contractors to provide paid sick leave to people who work for them. These regulations keep the federal government on pace to implement its paid sick leave rule by January 1, 2017.

The paid sick leave rule is, first of all, a milestone in the movement to set workplace standards that value families. More than 1 million working people affected by the rule will no longer lose their pay or risk being fired if they have to care for a sick family member.

And by the way, the definition of who constitutes a sick family member in the final regulations is inclusive. People working for federal contractors will be able to use sick days to care for an ailing grandparent, grandchild, sibling, domestic partner, and others. As we highlighted in the spring, the Labor Department proposed to define the term family broadly to include, for instance, an elderly neighbor living alone who is treated as a member of the family or a transgender youth who is staying with them after having been kicked out by their own biological or foster family. Although several industry groups and others asked for a narrower definition of family, DOL kept that broad definition in the final regulations.

There’s still more work to do to create workplaces that allow more of us to spend enough time with our loved ones while earning enough to support them. Almost all other countries in the world require that employers provide paid sick leave to their employees.  Indeed, the United States stands alone among industrialized countries in not requiring paid sick leave. Working people and their allies are fighting battles for paid sick leave in cities around the country while a bill in Congress would require companies to give family leave to working people nationwide. However, these regulations are a big step on the road to paid sick leave for all.