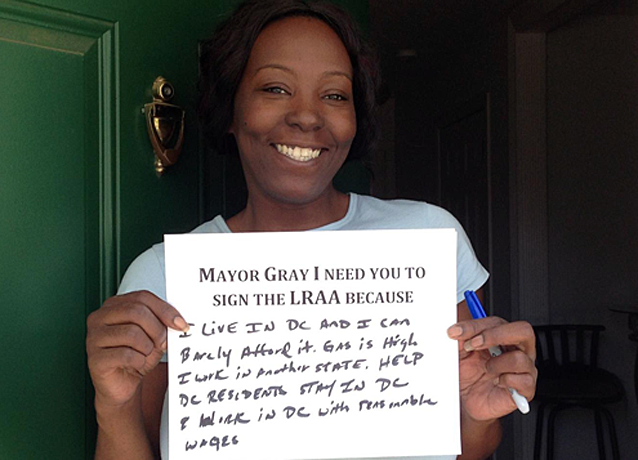 Last month, the D.C. Council voted in favor of the Large Retailer Accountability Act of 2013 (LRAA), which calls for large retailers operating stores of 75,000 square feet or more, and whose parent company generates more than $1 billion in revenues annually, to provide workers a “living wage” of $12.50 per hour, including benefits.

It is time for our elected officials to stand with us, D.C. workers and residents, and make sure the Large Retailer Accountability Act is signed into law. Join hundreds of residents, union members and faith leaders for a Town Hall meeting in Ward 7 to make sure our voices are heard.

The cost of living in D.C. is only going up and more and more residents are being forced out of the city. With all the new development, it seems everyone is getting paid except D.C. residents. The LRAA is a fair deal for D.C. residents and only asks for more from the largest, wealthiest companies, who can best afford to pay. It’s time to come together and speak up for a living wage now!

What: Town Hall to speak up about why D.C. retail workers deserve a fair wage!

Need a ride? A bus will be provided at the AFL-CIO HQ and will leave at 5:15 p.m. and return to the AFL-CIO after the program at 8 p.m. Please RSVP to Eddie Acosta at eacosta@aflcio.org.