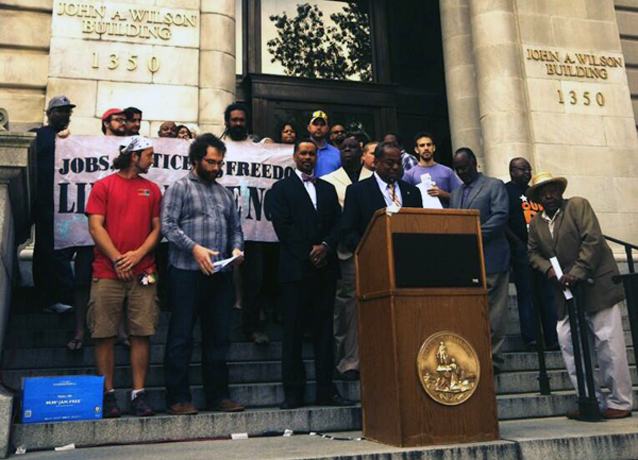 Right now, Washington, D.C., residents are waging a mighty struggle to guarantee living wages from the most profitable retailers in their city. Last month, the D.C. Council passed the Large Retailer Accountability Act (LRAA), which would require large businesses in the district to pay a living wage to employees. The LRAA would only apply to retailers with over $1 billion in revenues, that are not covered by a collective bargaining agreement, and that operate stores over 75,000 square feet. Those businesses would have to pay a living wage of $12.50 an hour, which could include benefits and be adjusted for inflation.

The vote was the product of years of organizing by Respect DC, a campaign founded by members of DC Jobs with Justice in late 2010 in order to ensure that the D.C. community had a say in if and how Walmart opened up shop in the city. Respect DC began by asking Walmart to sign a binding community benefits agreement for all new stores, but the world’s largest retailer refused to negotiate. After two years, frustrated coalition members turned to the City Council to ask for a legislative solution to demand the company do right by workers and community members, and so the LRAA was born.

Now, only one thing stands between Respect DC and a history-making victory: the threat of a potential mayoral veto.  But if the bill prevails, Jobs with Justice coalitions in cities around the country could point to the precedent-setting legislation to push for their own living wage bills locally – potentially creating better jobs from the retail industry nationwide.

The facts about Walmart jobs speak for themselves. The company has been expanding at a dizzying rate since opening its first store in 1966, but communities have been challenging its unapologetic race to the bottom for just about as long. Jobs with Justice local coalitions have always approached Walmart with an eye toward building working-class power, whether that meant standing with workers organizing – such as when Walmart lube shop workers in Denver tried to form a union in 2005 – or with communities concerned about Walmart’s impact on the local economy.

In a 2005 report, Walmart: Rolling back workers’ wages, rights and the American Dream, American Rights at Work, (now merged with Jobs with Justice) detailed Walmart’s impact on workers and their communities:

“When Wal-Mart plunges into an area, it doesn’t simply co-exist with existing businesses and eat from a larger retail pie. Wal-Mart moves in and replaces good jobs with its own jobs that pay less, have fewer benefits, and are without union representation.”

The history of Walmart’s community unrest stretches to several cities around the country, and Jobs with Justice has been there for most of it. In 2006, Chicago JwJ was at the center of a game-changing Walmart fight when the group joined other community organizations and unions to pass a living wage ordinance for big box retailers similar to the LRAA. The bill, which would have required Walmart and other retailers with more than $1 billion in annual sales to pay a minimum of $10/hour plus an additional $3 in fringe benefits, represented the first time labor and community groups went on the offensive together to hold big retailers accountable. In response, Walmart threatened to stop all efforts to build in Chicago if it passed – prompting then Mayor Richard Daley to veto the bill, his first veto in 17 years.

But today, with multiple stores now open in Chicago, the long-term impacts of Mayor Daley’s veto have proven disastrous.  In 2011, David Merriman and Joseph Persky conducted a study on the Walmart’s Chicago impact noting:

As predicted, Walmart’s first urban foothold did little to increase overall jobs, and in fact, decreased job standards and quality.

Fast forward to 2013, and now D.C. residents have the opportunity to set a new “first” for Walmart if they can guarantee the company will pay a living wage.  And the D.C. community wouldn’t be the only one to benefit – Walmart associates nationwide have joined together to form the Organization United for Respect at Walmart (OUR Walmart)  to demand a living wage, similar to what the D.C. law would provide.

In other cities like Boston, San Francisco and New York, Walmart‘s attempts to saturate urban markets have been met with community-led resistance efforts organized by Jobs with Justice coalitions. “Walmart has made promises that it has not kept.  As it prepares to expand, we need to highlight this simple truth as it makes more promises to other neighborhoods and organizations,” says Susan Hurley, current director of Chicago Jobs with Justice, which is still organizing communities in Chicago to regulate Walmart expansion and support a new batch of workers organized nationally for the first time with OUR Walmart.

The question remains, will Mayor Gray repeat the mistakes made by Mayor Daly in Chicago circa 2006? Or will he create his own legacy, defending the economic security of D.C. residents and setting a new precedent for communities around the country?

We won’t have to wait long to find out.  All eyes, and picket signs, are focusing on D.C.