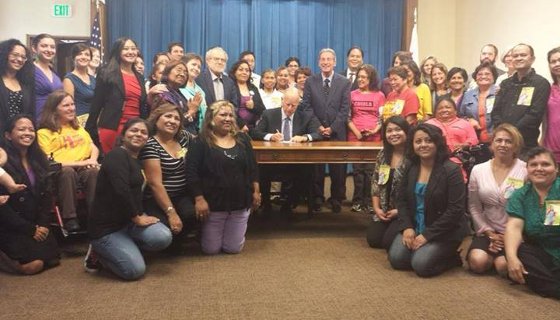 Today, California Governor Jerry Brown was joined by a group of domestic workers as he signed the California Domestic Workers Bill of Rights in his office.

It’s worth celebrating all of the workers and supporters who made this incredible victory possible. The bill is the result of a seven-year organizing effort of the California Domestic Workers Coalition, National Domestic Workers Alliance, and hundreds of allies including San Francisco Jobs with Justice, and it will impact the lives of hundreds of thousands of women in California and beyond.  California is now the third state in the country to have a bill of rights protecting the nannies, housekeepers and care workers whose work makes all other work possible.  This, along with the recent victory to bring homecare workers under minimum wage and overtime protection, marks a significant shift in how our country values caregiving.  Let’s keep the momentum going!

If you are on social media, please join the call of the California Domestic workers Coalition and the National Domestic Workers Alliance in taking a moment to send Governor Brown a thank-you note at @JerryBrownGov or on his Facebook page.