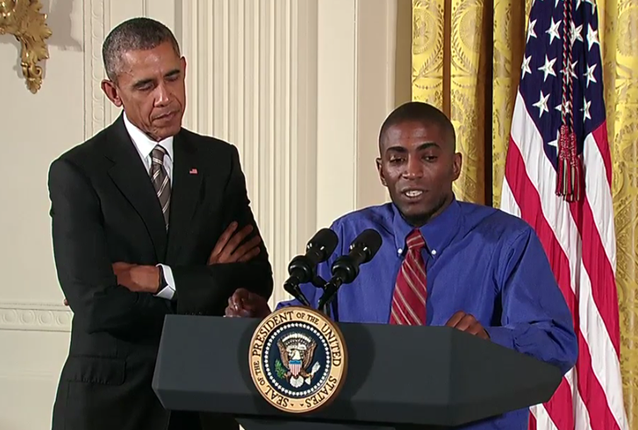 This week marked a historic occasion at 1600 Pennsylvania Avenue as working people, organizers, lawmakers, employers, and yes, the President of the United States himself came together for an historic White House Summit on Worker Voice. The all-day convening highlighted the incredible obstacles working people face when coming together to improve their job standards, the promising efforts of women and men who have defied risks and constraints and figured out how to better their workplaces, and what must be done to ensure Americans and future generations can truly speak together in one clear voice to reshape their jobs, their lives and their communities.

Our own Sarita Gupta and Beth Huang spoke at the Summit. Similar to what many of the other speakers affirmed throughout the day, both underscored the need for our nation’s leaders to reinforce collective bargaining rights and make way for new models of worker voice to flourish.

Like thousands of others who tuned in to watch or follow along with the Summit online, Jobs With Justice staff learned about innovations in organizing, gained inspiration and listened to frank discussions about how we can evolve our nation’s workplaces and laws to meaningfully support the voice of working Americans. Here were some of our favorite moments from the landmark day:

Sarita was part of the Summit’s opening panel after remarks by Senior White House Advisor Valerie Jarrett and Labor Secretary Tom Perez, who also moderated the panel. She emphasized examples of how unions today are protecting and advancing the voices of working people, while also reinforcing the need to look at innovative ways of solving the evolving challenges men and women face from unfair bosses and workplaces. As an example of this, Sarita lifted up how workers and community groups are addressing the growing problem of unpredictable schedules and unsustainable hours, as what was done successfully through San Francisco’s landmark Retail Workers’ Bill of Rights campaign.”

"Too many workers today face erratic schedules. Just imagine not knowing when you'll be going to work." –@saritasgupta #StartTheConvo

The panel included representatives from several employers, New Mexico State Senator Michael Sanchez, Ambereen Khan-Baker, a public school teacher from Rockville, Maryland, as well as Robert Hathorn, a Nissan employee fighting for his right to organize a union at a plant in Mississippi.

"I want a voice at work. That's why I'm organizing a union at @Nissan" #WorkerVoice #Starttheconvo @uaw

After the panel discussion, President Obama gave the Summit’s keynote address, and was introduced by Terrence Wise, a fast-food employee in Kansas City and a member of the Fight for $15 national organizing committee.

"I've been homeless with 2 daughters + things didn't change until I joined the #FightFor15" Terrence #StartTheConvo pic.twitter.com/fqWMs5Dm66

"As long as working people go without food and shelter and utilities, we won't back down." #StartTheConvo #WorkerVoice

The President highlighted Terrence’s family and their story; how Terrence and his mom hadn’t seen each other in ten years because neither of them make enough money on their fast-food wages to buy a plane ticket.

He then made a bold statement about the direction our country’s labor law should be headed in:

"We should be making it easier, not harder, for folks to join a union. We should be strengthening labor law, not rolling it back." —@POTUS

The rest of the day featured many more panels, including one about what millennials need to improve their workplaces featuring Student Labor Action Project coordinator Beth Huang. There were also remarks from Vice-President Joe Biden, and a town hall with President Obama and Coworker.org.

This is outrageous: federal law allows student workers to be paid below $7.25. @JWJ_Beth #StartTheConvo #Fightfor15

.@VP speaks of skyrocketing CEO to worker pay ratio. Yes, it's out of control. http://t.co/sbGlHWby4t #StartTheConvo

Some people have said that Wednesday saw the most discussion of how to build worker power and collective bargaining at the White House in years. And while the Summit was only a one-day affair, we certainly look forward to seeing more of the conversation continue, and even more reforms, collective action, and organizing taking hold.

"I am a big believer in collective bargaining and unions as a tool to empower workers." —@POTUS #StartTheConvo http://t.co/uvkDdRkQbN

Did you attend the summit or watch the livestream? Share your favorite part in the comments below!