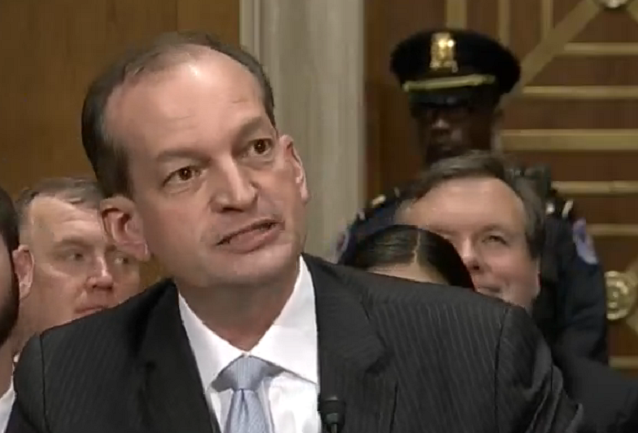 Too often, Acosta hid behind the shadow of President Trump, stating he would do what his “boss” wants regardless of whether it helped or hurt working families. Yes, Trump can fire the Labor Secretary, but cabinet secretaries are not mere lackeys of the president; otherwise, why would there be a need for Senate confirmation hearings at all? The Labor Secretary must be committed to fighting on behalf of the millions of working people in America who rely on the Department of Labor to make sure they get a fair day’s wage for a fair day of work, have safe workplaces, and more. Instead, Acosta portrayed himself more like a middle manager, more beholden to Trump than working people.

While he danced around questions on leadership, Acosta inspired even less confidence with his answers to probing questions on the Department of Labor’s role in keeping people safe on the job. Acosta tripped on his response as to whether the Department of Labor could successfully investigate workplace safety despite Trump’s proposal to cut more than one-fifth of the department’s funding. Those cuts could have a major impact on investigating workplace safety violations, but Acosta would not say if he found those cuts problematic.

Senator Elizabeth Warren (D-MA) highlighted Acosta’s inability to answer whether he believed silica—a substance known to cause cancer—should continue to be regulated by the Occupational Safety and Health Administration (OSHA), an agency of the Labor Department. Upon fumbling his responses to her questions about silica, Warren stated, “If you can’t give me straight answers … I don’t have any confidence you’re the right person for this job.”

Acosta also raised eyebrows when Senator Maggie Hassan (D-NH) questioned Acosta on whether he supported “sheltered workplaces” paying sub-minimum wages to people with disabilities. Acosta claimed it provided job opportunities for those who would ordinarily not have them, and said he did not want to disrespect people by using the term “sub-minimum wage.” Hassan fired back on Acosta for siding with employers, pointing out that it’s  disrespectful when employers pay  sub-minimum wages to people with disabilities.

Acosta’s answers about whether he would continue to defend the Labor Department’s overtime rule also raised serious doubt about whether he is fit to be Labor Secretary. Last year, the Department of Labor raised the threshold for those subject to overtime protection so that it covered working people making less than $47,726 a year Acosta. This change would have given 5 million working people in America a raise. A court put the rule on hold right before it was set to be implemented, but the Department of Labor appealed. Acosta refused to commit to defending that ruling in court and said that the increase in people subject to overtime protection might cause “stress” to employers. While Acosta did acknowledge that the overtime threshold had last been changed in 2004 and “the world has gotten more expensive” since then, he also suggested that the court might have been correct to throw out the overtime rule. He added that there should be no threshold at all below which working people automatically qualify for overtime protection. His testimony amounted to showing empathy for the stress corporations who might have to pay overtime without a similar level of empathy for working people who were supposed to receive a raise but had it snatched away at the last second by a court.

Working people can’t overlook that Acosta repeatedly used loyalty to Trump as an excuse to avoid taking detailed and definitive positions on how he’ll support us making workplaces safe, fair, and sustainable. Senator Warren perhaps put it best when she said, “I understand you may not want to answer my questions, but there are about 150 million American workers who are pretty interested in the answers.” Working people deserve no less than a champion and an advocate at the Department of Labor, and following his confirmation hearing, Acosta gives us serious doubt.