Monday marked the largest U.S. May Day protests in recent history. In hundreds of communities around the country, immigrants, students, parents, faith leaders, union members, and Jobs With Justice network activists, united to stand up for a bold vision of an economy that works for everyone.

On May 1, 1886, more than 300,000 men and women walked off their jobs as a rallying cry for the eight-hour workday. That historic strike 131 years ago ignited a movement of working men and women demanding respect and a fair return on their work.

Today, the struggle to provide for our families without fear continues. Politicians and lobbyists still rig the rules to favor the wealthy few at our expense. And profitable CEOs require millions of us to work more for less–less stability, less pay, less safety–while they laugh all the way to the bank.

"I have to work 70 hours a week because my jobs are low-wage jobs." – April, Stand Up KC Leader @unitedwestandkc #FightFor15 pic.twitter.com/krGoKMLmt8

The people who make our cars, clean our office buildings, cook and serve us food, and transport goods across the country are among those who flooded the streets on May Day. Some went on strike, while others used a vacation day to make their voices heard.

Teachers in Philadelphia and Pittsburgh, working without a contract, picketed outside their schools throughout the day. Educators in Massachusetts, San Francisco, Colorado, Chicago and elsewhere came out in droves to proclaim they want to “build schools and communities, and not walls.”

Hundreds of thousands of students, parents, community members & educators are working collectively on May 1st to #BuildSchoolsNotWalls. https://t.co/Qj2d2vlh8Q

Leonor Whitt, a public school teacher, was one of 20,000 individuals who participated in Chicago’s events. Leonor said, “It’s pretty empowering. I think that knowing that we are coming together for one common voice is helpful and I think it helps those who aren’t quite sure where to stand, how we can move forward together.”

Jesus Rea, a proud father of three young children, with one on the way, came to a May Day action with his family. He works as a safety coordinator for Union Pacific’s Commuter Rail Division and belongs to the BMWED. The union of railway employees is in a fight with big railroads for good jobs with family-sustaining wages and quality healthcare benefits. Jesus took to the streets because “Union Pacific Railroad is super-profitable but they want to make me pay more and more out of pocket for my family’s health care.”

Dante Butler is a security officer from the San Francisco region and member of SEIU-USWW. He explained that the joined his local May Day protest “because honestly, I couldn’t live with myself if I didn’t. I’m an African American man, born in the United States, but I had to get involved in some kind of resistance effort after I saw the way that Trump was turning people against immigrants. I am familiar with the criminalization of people of color. I hated the way that he was using fear to justify deporting people. I hated that immigration policy was breaking up families and forcing young children to live without their parents. I don’t want to know what could be born from the banning of liberty.”

Working people also came to speak up for those who didn’t feel protected or safe enough to join the protests. An anonymous autoworker who assembles cars for Nissan in Canton, Mississippi, is one such individual. He said he fears the harassment and retaliation he experiences from Nissan management for speaking up publicly about his support for a union. “As an African-American worker, I feel like this is similar to the civil rights movement and when Martin Luther King was marching. They held you down and didn’t want you to vote. That’s pretty much the case with Nissan right now.”

In Washington, D.C., Massachusetts, Atlanta and towns across the country, May Day events galvanized demands on local leaders to create or defend sanctuary policies. At a rally in Springfield, Eric Bauer of Massachusetts Jobs With Justice declared, “We want the Mayor and the City Council to protect our Muslim and immigrant families. We want them to feel like they’re safe in our communities and have the right to work, have overtime and minimum wage.”

This week’s incredible people-powered actions come on the heels of relentless marches, town halls, recess events, and airport protests. As with resistance actions held earlier this year, May Day drew in new and longtime activists, including teens studying democracy in action, and business owners validating the important role immigrants play in our workplaces and economy.

The record-breaking crowds at May Day events are sure to spark momentum and build solidarity for the fights ahead. Speakers and organizers underscored that the protests signal a fight forward, and not just a fight back. The demonstrations build off a trajectory of campaigns, including One Fair Wage and the Fight for $15, calling for good, safe jobs that started well before May Day, and require organizing well beyond May 1. 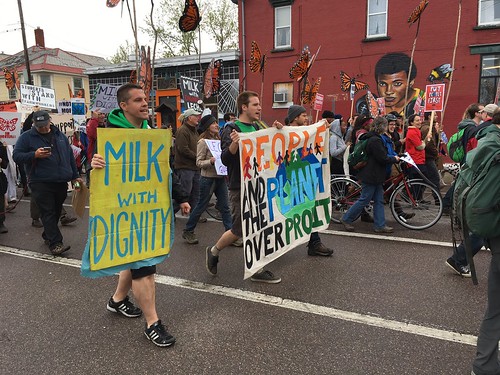