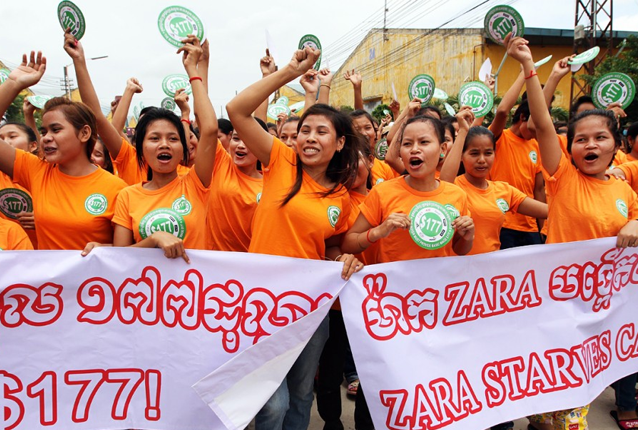 The labor movement in the United States and around the world is at a crossroads. Union-busting law firms have a firm presence across the globe. Countries with a vibrant history of trade unions like France and South Korea are undertaking anti-worker reforms. And trade proposals like the TPP threaten to undermine working people and their unions from Malaysia to Peru. A recent report by the University of Illinois at Chicago (UIC) highlights three organizations striving to address these new challenges while working toward a truly global workers’ movement.

Authors Nik Theodore of UIC and J. Alberto Fernández of The New School have looked at the Asia Floor Wage Alliance (AFWA), the Project of Economic, Social, and Cultural Rights (ProDESC), and the National Guestworker Alliance as models of organizing working people in this fully globalized economy. Their report is based on three fundamental principles of this economy: that capital is now mostly under control of the finance industry, that production has become fully globalized, and that employment has steadily become more informal and harder to regulate efficiently.

Each organization goes about worker organizing in its own way. AFWA brings together unions and social movement groups from across Asia to establish a transnational base wage and bargaining unit for garment workers. ProDESC is more localized, giving legal and technical support for men and women and communities to build capacity to take on political and corporate targets. NGA, meanwhile, helps organize notoriously precarious guestworkers and provides legal support when they take on the companies that actually control their employment.

It’s noteworthy that working people are front and center of the work being done by these organizations – which is also a central tenant of Jobs With Justice. AFWA’s strategy is based on organizing factories and ultimately creating conditions for men and women to be able to negotiate with major brands through the Asia Brand Bargaining Group. ProDESC has the crossborder Sinaloa Temporary Migrant Workers coalition to report, track and address abuses in the workplace both in the United States and Mexico. After guestworkers who processed seafood for a Walmart supplier in Louisiana were working under forced labor, the National Guestworker Alliance amplified their case. But it was the guestworkers themselves who directly took their message to Walmart and ultimately exposed the abusive conditions in the company’s domestic supply chain.

Each of these organizations is pushing the boundaries on worker organizing. Yet as the report underscores, no matter how new or innovative the strategies become, transformative, lasting change happens when working people take the lead and organize.