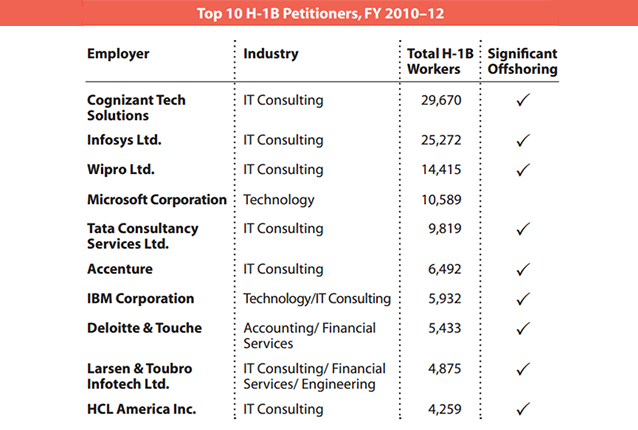 In places like southern California and central Florida, there’s likely been an uptick in kitchen table conversations about a very non-kitchen-table-talk topic: the H-1B visa, which is intended for employers to use for hiring foreign workers in higher skilled jobs on a temporary basis when U.S. workers are not available. That’s because approximately 500 Southern California Edison IT workers recently learned they’ll lose their jobs after the company decided to outsource the work to a contractor with an H-1B workforce. A similar number of Disney IT workers also found out they’d be laid off; their work has been outsourced to a contractor known to employ high numbers of H-1B workers.

And recent research suggests that’s to be expected. In a National Bureau of Economic Research working paper, economists from Notre Dame, the University of California-Berkley, and the U.S. Department of Treasury found that “…on average H-1B workers at least partially replace other workers in the same firm, with estimates typically indicating substantial crowdout of other workers.”1

To be clear, H-1B workers aren’t responsible for the loss of U.S. jobs or lowering of labor standards. That responsibility rests solely with employers who use the H-1B program’s inherently coercive conditions to drive down labor costs, even if that means replacing American workers. Because H-1B employers control these visas, speaking up on the job is very risky for H-1B workers – they can be fired and immediately lose the right to legally work in the United States. What’s more, many workers on temporary employment visas are often in debt to recruiters and other middlemen who charge significant fees to help arrange job opportunities. H-1B workers also can’t easily change jobs on their own, meaning walking away isn’t a real option for them. And so they are left with no leverage to confront a low road employer.

It’s not surprising then to learn that nine of the 10 companies recently receiving the most H-1B approvals – including Infosys and Tata Consultancy Services, both hired by Southern California Edison, and HCL America, hired by Disney – are in the business of offshoring and outsourcing. Hiring H-1B workers can mean a workforce paid below the average local wage per occupation. It doesn’t require sponsoring the workers for citizenship. And, by controlling the visas, there’s little risk to employers that these workers can push for higher pay, speak up about long hours, or leave for a better job. That’s quite a competitive advantage for businesses that pump up profits by bidding low on contracts while keeping down costs.

These companies’ business models illustrate why unchecked expansion of the H-1B program will likely exacerbate the fissuring of work. This term, coined by Dr. David Weil, describes the reorganization of work through arrangements that allow a company to divest itself of employment responsibility for workers carrying out tasks primarily for its own benefit. In doing so, a business can create contractual relationships with subordinate entities, like subcontractors, franchisees and even independent contractors, that perform specific functions previously done by the primary business’s own employees. Through these contracts, the primary business can dictate exacting standards and establish intricate monitoring and compliance systems to ensure the integrity and quality of the services rendered by their subordinate entities. The primary business thus reduces its labor costs and avoids responsibility under workplace laws for workers it effectively controls.

For workers, fissured work often means downward pressure on wages, lowered standards and the constant threat of job loss. Just ask the Southern California Edison workers using their last days to train the H-1B workers employed by Infosys and Tata who will soon take over for them.

There’s a role for employment-based migration in the U.S. economy, but it’s not as a tool for upending labor market standards. Expanding the H-1B visa program without meaningful worker protections – which is what’s proposed in Senator Orrin Hatch’s “I-Squared” Act – will turn it into a tool for employers to continue to get ahead at the expense of higher wages, family-supporting benefits and good jobs.

1 These findings stem from researchers being able to use the randomization inherent to part of the visa allocation process together with firm-level administrative data for the first time. This methodology allows for improved detection of causality and therefore more reliable results than past research which tended to lead to different conclusions.