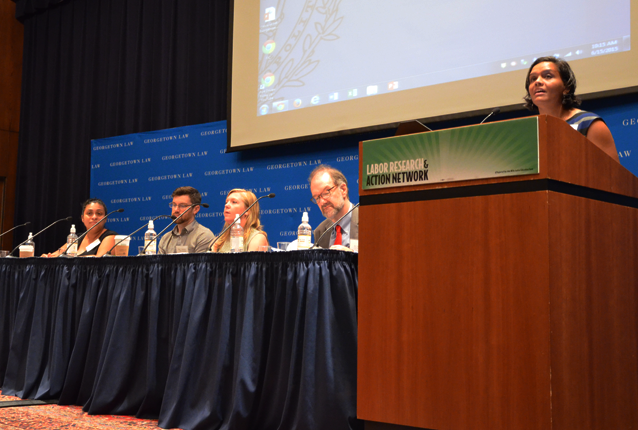 More than 250 scholars and practitioners gathered for the fifth annual national Labor Research and Action Network conference, a project coordinated by the Jobs With Justice Education Fund, last week. The two-day event, hosted by the Kalmanovitz Initiative for Labor and the Working Poor at Georgetown University, brings together academics, organizers and graduate students from across the country with the aim of bridging the gap between research and worker organizing.

“This is the time to take pause and take a collective breath and really examine the campaigns and research we’re moving,” said Sarita Gupta, Executive Director of Jobs With Justice, in her welcome speech. “We’re all working toward the same goal of building power for working people.”

LRAN’s growth has tracked the rising national momentum for better jobs and broader protections for working families. The first conference was held in 2011, following the curtailing of collective bargaining rights for public employees under Wisconsin Act 10. LRAN membership and national conferences continued to grow through the sustained attacks on the labor movement like the expansion of right-to-work to 25 states and the U.S. Supreme Court decision in Harris v. Quinn. Recent years have simultaneously marked a period of success for working people, as women and men employed in low-wage industries like fast food have organized across the country through the Fight for 15 and retail workers in San Francisco won first-of-its kind predictable scheduling policies. LRAN, which has now grown to include more than 1,000 scholars and practitioners, uses its national conference each year as a time to learn from labor’s successes and setbacks.

This year’s conference opened with a conversation on the fissured economy, featuring U.S. Department of Labor Wage and Hour Administrator Dr. David Weil, CTUL Co-Director Veronica Mendez, Teamsters Port Division Representative Christina Montorio and Workers United Organizer Jack Mahoney. The term “fissured economy” refers to the reorganization of work through arrangements such as extensive subcontracting that allow companies to divest themselves of employment responsibility for workers carrying out tasks primarily for their benefit. All four speakers emphasized the need to develop creative and innovative strategies to combat the resulting increasingly low labor standards.

Workshops spread across the two days were divided into four tracks: Developing New Membership Models and Sustainability, Innovating Campaign Strategies That Build Power, Advancing Worker Rights in a Changing Economy and Holding Corporations Accountable. A common theme prevailed across the workshops – the economy is changing and labor needs to keep up.

In concert with this theme, Jobs With Justice staff presented at two workshops. Campaigns Director Erica Smiley participated in a panel on low-wage employer fees, where she discussed efforts to implement a fine on large, profitable corporations like McDonald’s and Walmart, which resist paying employees a decent wage, that would be channeled into programs benefitting workers and their communities. During a panel titled “Gain More Control of Working time,” Gupta discussed Jobs With Justice’s campaigns to ensure men and women can achieve better hours, and some semblance of stable work schedules to improve their lives.

In addition to providing a space for researchers and practitioners to come together, LRAN supports new scholarship in the field through its new scholars research grant competition. 2015 grant winners, who were awarded a combined $16,000, presented on their ongoing research at the conference. Their research spanned topics from organizing immigrants in Chicago worker centers to labor-environmental coalitions in rural areas.