Facing Deportation for Showing Up to Work 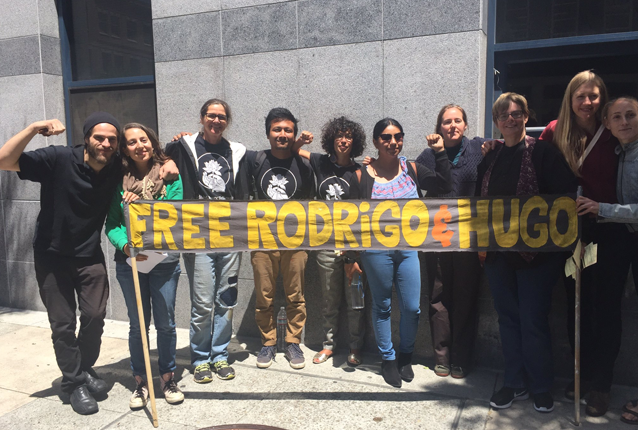 This weekend, instead of celebrating Father’s Day with their children and family, beloved fathers and longtime U.S. residents Hugo Mejia and Rodrigo Nunez spent the special day in a detention center near Oakland, California.

Immigration and Customs Enforcement (ICE) has held Hugo and Rodrigo in immigration custody since May 3. That morning, their employer sent them to work on a new construction project at a hospital on the Travis Air Force Base. At the base, a military official detained and reported them to immigration officers. Now they fear the worst: that the federal government will deport them at any point and tear them away from their families and communities.

The devoted family men call California home and have lived in the United States for more than 15 years. Hugo is a foreman at S&R Drywall and a member of the International Union of Painters and Allied Trades (IUPAT) and Rodrigo is a member of the Carpenter Union Local 713. The construction workers are local volunteers with deep community ties. Hugo lives in San Rafael with his wife, Yadira and his three young kids. His eldest children have been granted protection from deportation through DACA, and his youngest is a U.S. citizen.  He volunteers at his children’s school. Rodrigo lives in Hayward with his wife and his three young kids, all of whom are U.S. citizens. He is an assistant coach for his son Sebastian’s baseball team who also volunteers at his church.

None of these facts have compelled the local ICE field office director to stop their expedited deportation cases or release Hugo and Rodrigo. ICE has full discretion to discharge them from custody so they can reunite with their families while reviewing their cases.

The Trump administration’s ramped up immigration policies could result in more of our friends and neighbors getting separated from their families as a result of reporting to work. Hugo and Rodrigo deserve to watch their children grow up and thrive.

If ICE deports Hugo and Rodrigo, everything that have worked to achieve to sustain their families could be taken away. And the loved ones they leave behind will experience an emotional and economic toll. The Urban Institute and Migration Policy Institute study found that a father’s deportation causes a family’s income to drop an average of 73 percent.

Hugo’s and Rodrigo’s detainment has caused a widespread outcry among labor, faith, and community groups, and elected officials. Jobs With Justice and our network of coalitions are supporting a #FreeHugo&Rodrigo week of action currently underway urging ICE to free both men and halt their deportations.

You can help keep up the pressure to reunite Hugo and Rodrigo with their families with two simple gestures:

1) Make a call to the San Francisco ICE field office to demand that Director David Jennings use his prosecutorial dissertation and release Hugo and Rodrigo now.

2) Encourage your friends and family to do the same.